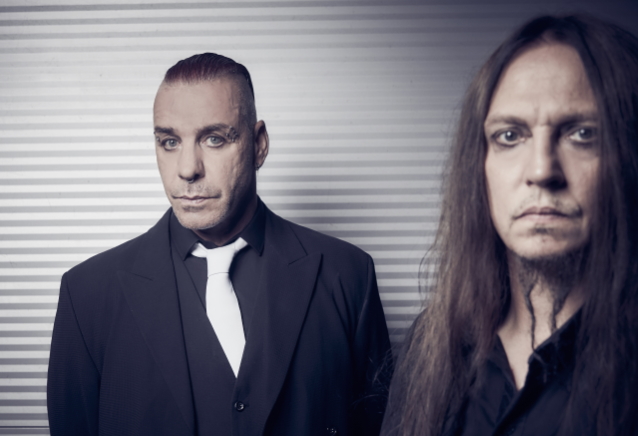 In a new interview with Pete Bailey of Primordial Radio, Swedish multi-instrumentalist Peter Tägtgren was asked if his former LINDEMANN collaborator, vocalist Till Lindemann of German industrial metallers RAMMSTEIN, is as "larger than life" as appears to be. "Yeah, if you see it from the outside," Peter responded. "If you know him, he's not really any different than anybody else. He just has a vision of how he likes things to look like. And he's a very smart guy when it comes to the business stuff and to the show. Other than that, he's a normal guy."

Two months ago, Peter admitted to the "Scars And Guitars" podcast that he was "not really" friends with Till anymore. "But it doesn't matter," he said. "So, just to keep it short and [concise], we did something major and it left rings on the water, so to say. I'm proud of it. I was happy. We were really productive when we were working together. There is nothing like me and him when we start doing shit. We can just sit and talk about things like, 'Ah, it would be cool to do it like this,' and then 10 minutes later, we have it."

He continued: "[Till and I] had a dynamite chemistry. We just had to look at each other and then we started writing music. It was that easy. The easiest part was the studio work. We could have spit out hundreds of songs every year because we had so many ideas, and we really clicked.

"So, yeah, it's sad," Peter added. "We could have been one of the biggest bands in the world if we kept on going, I tell you that. It was insane.

This past July, Peter told the "I Ask No One" video podcast that the final tour he played with LINDEMANN "was not really my cup of tea at all, to be honest. And that's why we're not playing anymore together. So [Till] can go on with his stuff; I go on with my stuff. To keep it very simple."

In November 2020, Tägtgren and Lindemann confirmed that they were ending their collaboration on the LINDEMANN project.