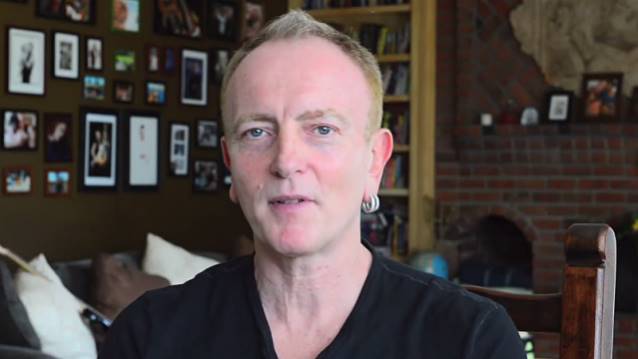 Earlier this week, DEF LEPPARD guitarist Phil Collen was interviewed on the "Shmonty And Conklin" radio show (web site),which airs on the 93.3 KDKB station in Phoenix, Arizona. You can now listen to the chat using the SoundCloud player below.

Asked when it's going to be DEF LEPPARD's turn to be inducted into the Rock And Roll Hall Of Fame, Collen said: "I don't know and I don't care, really. I think it's great that KISS got in there. They should be there. They're an American band [that's been going for] 40 years and they've been snubbed [for a long time]…. So, for them, I think [it's great]. For me, I really don't care. [It's, like], whatever. The way I look at it, I've got two diamond albums sitting on my mantlepiece — that's ten times platinum;I've got two albums. That means the fans went out and bought it, so that means a lot more to me, I think."

Collen was also asked what that huge goal at the end of the tunnel is for rock bands like DEF LEPPARD, if it's not the Rock And Roll Hall Of Fame. "It changes," he replied. "Back in the day, it was getting a gold album, then a platinum album, and they don't really exist anymore, so that's passed by. There's all these other things. You just want your music to translate, for everyone to hear it, which we're doing — we're succeeding there. And then with concerts, it's always been, you wanna play a certain venue — you wanna be at Wembley, Madison Square Garden, the Marquee club, the Budokan in Japan… So they're all goals and ambitions that we've actually succeeded already. But you keep adding more. We've just written 15 songs for our new album. We're actually blown away, 'cause it normally takes us about five years to write ten songs, and we've got 15 songs already — not finished, but we're gonna have an album out next year. So for us, that's our big goal. Next year's gonna be a really important year. We've got this great album. The recording has been really going fast and flowing, so we're ultra excited about that."

He continued: "You know, things keep changing. So they're the ambitions that you keep having. And because this industry kind of changing and morphing into something else. The record industry, per se, is kind of in its death throes — even with downloads, it's going towards streaming. So it keeps constantly changing, and I think you just have to be able to roll with the punches and that's what we're doing and still kind of map our ambitions, which we still do. So that's really helping."

In a recent interview with Billboard.com, DEF LEPPARD singer Joe Elliott echoed Collen's sentiments regarding being inducted into the Rock And Roll Hall Of Fame. He said: "I haven't thought about it until literally today because they're asking us our opinion on the KISS thing. I imagine the Rock And Roll Hall Of Fame as this board table with six Mr. Roboto's sitting around, faceless tuxedo-wearing prats. This is the way I look at it as there are two hats. They pull out the one, 'DEF LEPPARD, BON JOVI, KISS, MÖTLEY CRÜE, fuck that, no.' 'Leonard Cohen, John Cougar Mellencamp, Bruce Springsteen, Tom Petty, REM, the PIXIES, we want all them in because they're cool. We don't want RATT, we don't want POISON.' I was really happy when I saw Johnny Rotten tell them to go fuck themselves. That's what I would do… even if I did get talked out of it by the other guys in the band. But I don't care. I don't gain anything from it. If you get an Oscar, your next film you're gonna be offered five times the money of your last film, and better scripts. When you get inducted into the Rock And Roll Hall Of Fame, the next day you wake up in the same bed. You don't get tours thrown at you to open for LED ZEPPELIN or find out Paul McCartney wants to write a song with you. It's rubbish. There's no gain from it."