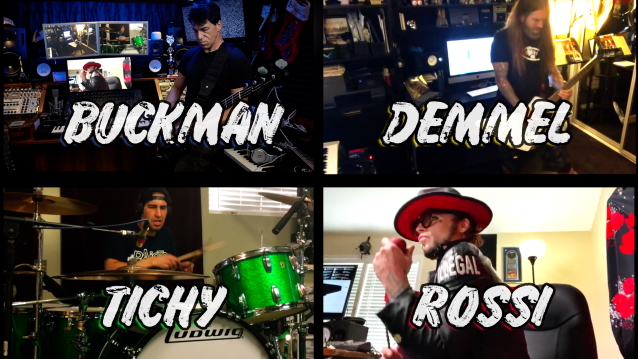 "I saw one of Phil's 'Collab-A-Jam' videos," said Buckman. "I had been wanting to do some of these with some of my bandmates and friends, so I texted Phil and said, 'I want in!' He said, 'Cool! Pick a song!' and 'Hysteria' was my first thought." Demmel then called their mutual friend Brian Tichy, and he jumped on board. For vocals, Buckman knew that his STOWAWAYS bandmate (ShipRocked's "all-star" band) Lukas Rossi would be the perfect guy to crush these vocals.

The guys recorded their parts in their own home studios — Buckman and Tichy in Southern California, Demmel in Northern California, and Rossi in Nashville. The files were then sent to Gabe Lopez for the final mix.

Buckman said: "Gabe is a friend of mine, who is best known for working with Belinda Carlisle and NEW KIDS ON THE BLOCK, as well as producing my wife's band, BETTER OFF BLONDE. I knew that, with his background in the pop world, his mix would make the song sound amazing."

The foursome also shot their own video footage.

"I've gotten really into photography and videography in the last year or so, and I knew I wanted to edit the video myself, so I told the guys how I wanted them to shoot, and they did a great job. Especially because Demmel and Tichy only had access to iPhones," added Buckman. Considering it's the first music video I've edited, and my biggest project to date, I'm pretty happy with the outcome."

Buckman, who is also an actor and voiceover artist, can be seen as Nick Murray on the CBS show "Broke" this Thursday, June 18 at 9:30 p.m. He is currently working on new FUEL material and is looking forward to making up a lot of cancelled FUEL and PETTY CASH dates as soon as possible.

Demmel's debut BPMD album, "American Made", is now available through Napalm Records, and a new VIO-LENCE self-titled record is slated to be released on Metal Blade.