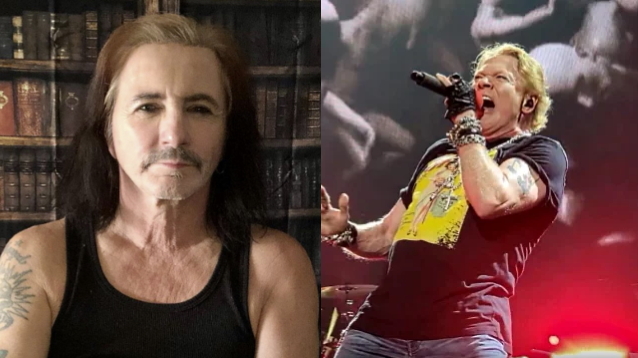 L.A. GUNS frontman Phil Lewis says that Axl Rose did a "fantastic" job filling in for Brian Johnson at the end of AC/DC's "Rock Or Bust" tour.

AC/DC postponed the last 10 dates of its spring 2016 North American trek after Johnson was advised to stop playing live or "risk total hearing loss." The band went on to complete the European and North American legs of its "Rock Or Bust" tour with the GUNS N' ROSES frontman as a "guest vocalist."

In a new interview with the "Talk Louder" podcast, hosted by veteran music journalist "Metal Dave" Glessner and lifelong hard rock/metal vocalist Jason McMaster (DANGEROUS TOYS),Lewis told McMaster (as transcribed by BLABBERMOUTH.NET): "Your voice is legendary. When Axl stood in for Brian in AC/DC, I was rooting for you. I think you would have done a much better job, personally."

After McMaster said that Rose "kicked it in the ass" singing for AC/DC, Phil concurred. "He's fantastic," he said. "Axl is a singer's singer. And people that don't sing don't get it, because they think he sounds nasally and he has got that funny vibrato. But he's a singer's singer. We're talking, like, seven octaves. He did that AC/DC stuff on his head; it was effortless for him. And you can't help feeling bad for old Brian puffing around up there. I've toured with him, and after about the third or fourth night, he's hurting. And it's a tough gig for anyone, especially somebody at that age. But, yeah, Axl just came in and nailed it." Lewis then once again praised McMaster, saying: "But you could have done it too, though."