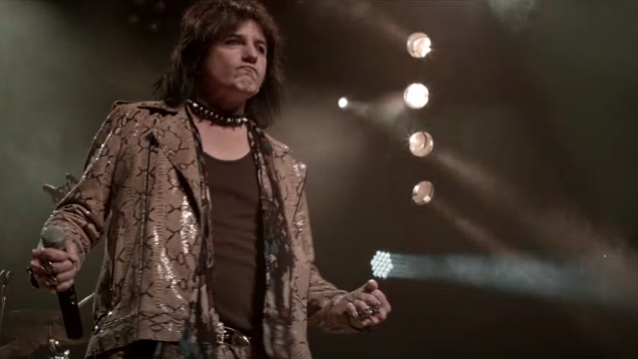 Phil Lewis has slammed drummer Steve Riley's lineup of L.A. GUNS, saying "we can't have another shitty version going out diluting the brand."

This past January, Riley was sued by Lewis and guitarist Tracii Guns and Lewis in California District Court. Joining Riley as defendants in the case are the three musicians who perform in his recently launched rival version of L.A. GUNS; that group's manager, booking agent and merchandiser; and Golden Robot Records.

This past May, L.A. GUNS, featuring Lewis and Guns, released a new single, "Let You Down". The band is currently writing and recording songs for a new studio album, tentatively due in 2021 via Frontiers Music Srl. This will be the third studio album since the much welcome reunion of the band's core foundation of Lewis and Guns. It will follow the well-received studio albums "The Missing Peace" and "The Devil You Know", plus the live release "Made In Milan", and a covers EP, "Another Xmas In Hell".

Asked in a new interview with Tulsa Music Stream for an update on the lawsuit, Lewis said (see video below): "It's in its wrapping stages. It's a tricky process.

"Here's the thing: Riley had it good. He had a piece of the name, and he was pulling in a decent amount of dough just on merch — just on independent merch. And, you know, nobody really had a problem with that. But as soon as he put another lineup together, and then started usuing ex-bandmembers, that was enough. That was, like, 'Oh, we've gotta do something about that.'

"Since the reunion [between me and Tracii] — the reunion started four years ago — we've been more successful than we ever have been before. I know we haven't sold millions of records, but with those stupid studio costs [in the early days of the band], we never saw any of it. But the last two records changed everything. We made a lot of money, and we were prepared to put a lot of money into this [legal battle], to stop this bullshit."

According to Lewis, his band with Guns is the only real version of L.A. GUNS.

"I [reconnected with] Tracii for the right reasons — musical reasons," the singer said. "And it's what L.A. GUNS is — me and Tracii. And we proved it with these two phenomenal records. And they [Riley's L.A. GUNS] come out and they try to play this lame fucking sort of Billy Idol-wannabe soupy terrible songs.

"We've got so much invested in this now, we can't have another shitty version going out diluting the brand. It has to be squashed. I don't wanna put anything out until it is taken care of.

"We have a case coming up in October, and we'll get a final judgment. And it's looking good… We have a very strong case, and we've thrown a lot at it. So there's no way we're gonna lose this."

Despite leaving the band soon after the release of 2002's "Waking The Dead" to focus on BRIDES OF DESTRUCTION (his short-lived supergroup with MÖTLEY CRÜE bassist Nikki Sixx), Guns "is the owner of common law trademark righs" for the L.A. GUNS name and logo, the complaint claims. It notes that Guns founded the band in 1983, four years before Riley joined, and that Riley did not perform on the group's 1984 debut EP and contributed to just a single track on their 1987 self-titled full-length debut.

Our Youtube page is functional and running.
No live streams yet but we just uploaded our 20th episode to it. Subscribe to our channel.