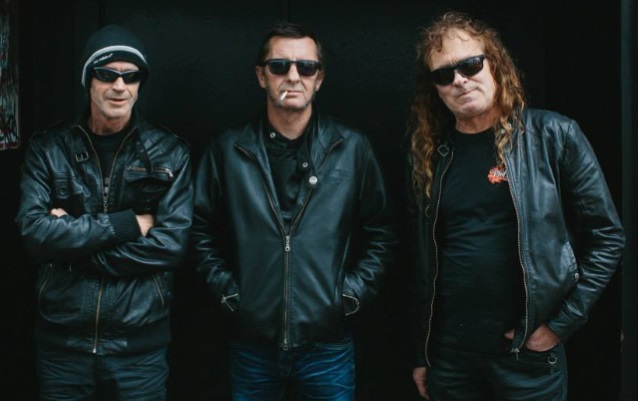 Tracey Donaldson of The Rock FM radio station in New Zealand recently conducted an interview with AC/DC drummer Phil Rudd. You can now listen to the chat at this location.

Rudd released a solo album, "Head Job", on August 29 via Universal Music Australia. The official lyric video for the CD's first single, "Repo Man", can now be seen below.

Over the past 20 years or so amidst spending time drumming for Australia's favorite rock export AC/DC, running a studio and a restaurant, racing cars, flying helicopters and a bit of farming in the land of the long white cloud; Melbourne-born drummer Phil Rudd has been quietly writing an album's worth of songs.

From the rollicking first single "Repo Man", a gentle reminder about karma; to the rocking title track "Head Job", which does not have intimate connotations but is a play on words about going to the pub to commiserate with your mates about someone doing your head in… from the upbeat dirgy groove of "Bad Move" to the relationship-driven "Crazy"; Rudd has delivered a very personal album "about the shit that goes on," as the great man himself said.

Perhaps with the exception of "40 Days & 40 Nights", these songs were more inspired by everyday personal experiences in life rather than being about touring the globe with the world's biggest rock band.

Citing influences ranging from Ringo Starr and FREE/BAD COMPANY's Simon Kirke, to MOUNTAIN's Leslie West and AC/DC bandmates Malcolm and Angus Young, these songs and lyrics are all very special to Rudd and when talking about the release of this album which has had such a long gestation, he said, "I'm very happy for it to finally make its way out there and for people to hear it!"

The songs were penned primarily by Rudd with the assistance of Allan Badger and Geoffrey Martin — musicians Phil met on the local scene, which he says "turned out to be a great musical partnership." "Badge" and Martin also perform vocals, guitars and bass on the album, with Rudd sitting in the producer's seat. The tracks came together over a period of time recorded at several locations including the studio that Rudd built himself not far from his restaurant Phil's Place in Tauranga, New Zealand.

"I hope everyone thinks this is a great album from start to finish because that's the idea," Rudd told Triple M. "We didn't put anything on there that we didn't like. There's no filler. There's plenty of Phil, but no filler."

Rudd joined AC/DC in 1974. He had previously played with Angry Anderson in BUSTER BROWN and left that band to join the COLOURED BALLS with Lobby Loyde.

When AC/DC bassist Mark Evans left the band in 1977, Rudd became the only Australian-born member of AC/DC.

Rudd exited AC/DC in 1983 and was replaced by Simon Wright, then Chris Slade. When Slade left in 1993, Rudd rejoined the band.

According to Noise11.com, Rudd moved to Tauranga, New Zealand in 1983 and has lived there ever since.