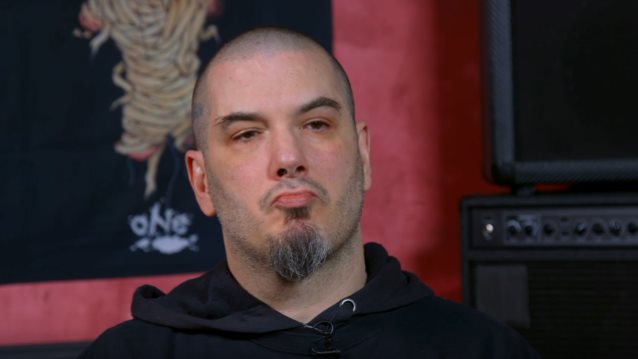 Former PANTERA frontman Philip Anselmo has blasted "phonies" in the music business "who pretend to be perfect" while suggesting he was racist because a video surfaced of him last year giving the right-arm salute and yelling a white-supremacist slogan at a California concert.

Anselmo performed the PANTERA classic "Walk" at a January 2016 "Dimebash" event at the Lucky Strike Live in Hollywood in honor of late PANTERA guitarist "Dimebag" Darrell Abbott. As he left the stage, he made a Nazi-style salute. He appeared to say "white power" as he made the gesture, but later claimed he was joking about drinking white wine backstage and was reacting to the audience members up front who he says were taunting him.

MACHINE HEAD's Robb Flynn — who played PANTERA songs with Anselmo at "Dimebash" — released an eleven-minute response video in which he denounced Anselmo as a "big bully" and a racist. He concluded by saying that he would never play another PANTERA song again. ANTHRAX's Scott Ian, who is Jewish, released a statement on his official web site saying, "Philip's actions were vile" and invited Anselmo to make a donation to the Simon Wiesenthal Center.

During a brand new interview with Loudwire, Anselmo said about the Internet reaction to what transpired that night (see video below): "I've just been sitting back and silently observing the scrutiny and the hypocrisy and the online… what you call, I guess, pile-on. And, you know, I sit there and I'm, like, 'Okay. All right.' And it's interesting to me — it really is interesting to me — how many people I know in the music business that I could name by name, but I won't, because I've got too much class for that, who pretend to be virtuous and pure and pious and perfect in their lives… And I'm glad that they know deep down inside… They know who they are. They know that I know they're phonies."

He continued: "Just to end this, when I apologized, I meant it, as far as anyone that I may have truly offended. But, in this day and age, I have come way too far. My book is way… My life is open. I'm open about everything. You ask me about drug use, you ask me about anything in this world... I'm an open book. And I think that there is this online community, and then there's the real world, you know? There's the real world. Over this past year, I've seen that for my very own eyes that there's an online community, and then there's real life."

Anselmo also cautioned against knee-jerk reactions from people who know nothing about the situation and whose only connection to him is through his music and his media persona. "It's dangerous, too, in the long run, because it goes hand in hand with the computer age of instantaneous everything — instantaneous everything," he said. "And that is where the Internet is very interesting, with Facebook and all this shit, where everyone has a platform, everyone is an expert, everyone's a fucking mind reader, everyone knows everything about everybody, because they can look at a couple pictures and, 'Huh! I know you, from head to toe, since the beginning of your birth… I know your every thought.' And it's fake, and it's sociopathic."

The new album from Philip's SUPERJOINT project, "Caught Up In The Gears Of Application", was released on November 11 via Anselmo's Housecore record label.