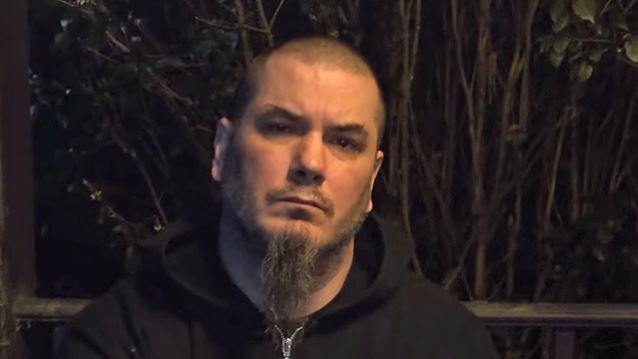 PHILIP ANSELMO Denies Being Racist: 'Anyone Who Truly Knows Me Knows That It's Utterly Ridiculous'

Former PANTERA frontman Philip Anselmo has once again denied being racist after a video surfaced of him earlier in the year giving the right-arm salute and yelling a white-supremacist slogan at a California concert.

Anselmo performed the PANTERA classic "Walk" at the January 22 "Dimebash" event at the Lucky Strike Live in Hollywood in honor of late PANTERA guitarist "Dimebag" Darrell Abbott. As he left the stage, he made a Nazi-style salute. He appeared to say "white power" as he made the gesture, but he later claimed he was referring to drinking white wine as part of an "inside joke."

Now in his first interview about the incident, Anselmo apologized for his actions but dismissed as "utterly ridiculous" any suggestion that he is racist.

"First and foremost, I do take full accountability," he told Decibel for the magazine's cover story in the December 2016 issue. "I'm not deflecting at all. What I did was insulting, absolutely, and abhorrent, because it did truly upset people, and it hurts my heart that anyone would think that I'm the dreaded 'R' word — a racist. Anyone who truly knows me knows that it's utterly ridiculous. But if I did offend my Jewish friends, people I work with, my associates, other people in bands . .. if I were to upset people in that particular way — that's why I apologized. That apology is there — and no, you won't get another one ever again."

Anselmo added that it is "kinda funny" that he is being accused of being a racist "considering I've got a Mexican drummer and a half-black guitar player," referring to his SUPERJOINT and ILLEGALS bandmate José Manuel Gonzalez and SUPERJOINT guitarist Kevin Bond, respectively.

The singer went on to explain what happened that fateful night. "First and foremost, I was absolutely smashed drunk," he said. "No excuse, but I was. It was late and my mood was mixed because of the situation in general. We were honoring my dead, murdered guitar player and it's still something that a piece of me has not come to grips with. I know people are reading this in black and white, but it makes my heart ache as I say it. Now, [from] the second I stepped on that stage until the bitter end of that night, there were a couple of kids with an absolute agenda constantly, all night long, calling me the dreaded 'R' word. 'Racist, racist, racist,' over and over and over-in between songs, during songs, during my stage banter. And I marked it: At 4:35 in the video, you can see my attention slowly beginning to get irked and agitated. By 5:10, you can see me actually eyeballing these people and engaging. They were 70 feet away from me screaming this shit. I even invited them up onstage and dared them to call me that to my fuckin' face, and I said I would knock them out cold. You can check the video for yourself. Can you hear the kids? No, you can't. But I most certainly did. And I've talked with people who were there who can corroborate because they were standing right next to them."

He added: "Should I have done it? Hell fucking no. Would I take it back? Absolutely. But my sense of humor is dark and my temper is and always has been volatile, so I reacted. I reacted in an ignorant way. I own it. But do I believe in it? That's ridiculous."

Ultimately, Anselmo claims he yelled "White power!" and threw the Nazi salute because he was joking about drinking white wine backstage and because he was reacting to the audience members up front who he says were taunting him. "The white wine thing was a running joke backstage after — get this — kissing Doug Pinnick [of KING'S X] on the lips," he said. "And he says to me, 'Whoa — you taste good!' Because I was drinking a bottle of white wine. I even joked about it with him — 'white power,' hahaha. The funny thing about that is that particular room was for certain artists only. Other certain people who were part of the Dimebash were not allowed back there. I guess they felt slighted or in quotation marks — 'offended.' So, there was a running gag there, and it carried on even after the incident. What went down onstage was an extension of that, but also a firm reaction to these motherfuckers [up front], who, that's exactly what they wanted."

"People say I have a history of racism," Anselmo told Decibel. "When I was in PANTERA, I was completely and utterly confused when, in the '90s, the T-shirt started circulating that said, 'Stop Black-On-Black Crime.' Today, as a damn-near-50-year-old man, living in 2016 where America is divided so completely, I understand it and I support that sentiment completely. But as a young man in my 20s, I didn't understand it and I did speak out vehemently against it, because, to me, it basically said, 'Stop black-on-black crime, but everyone else is fair game.' That's how I took it. And anybody could get that misconception. So, there's your mighty racist history right there. I took offense to a T-shirt."

You can read Anselmo's entire interview with Decibel in the December 2016 issue of the magazine. Copies can be purchased at Store.DecibelMagazine.com. 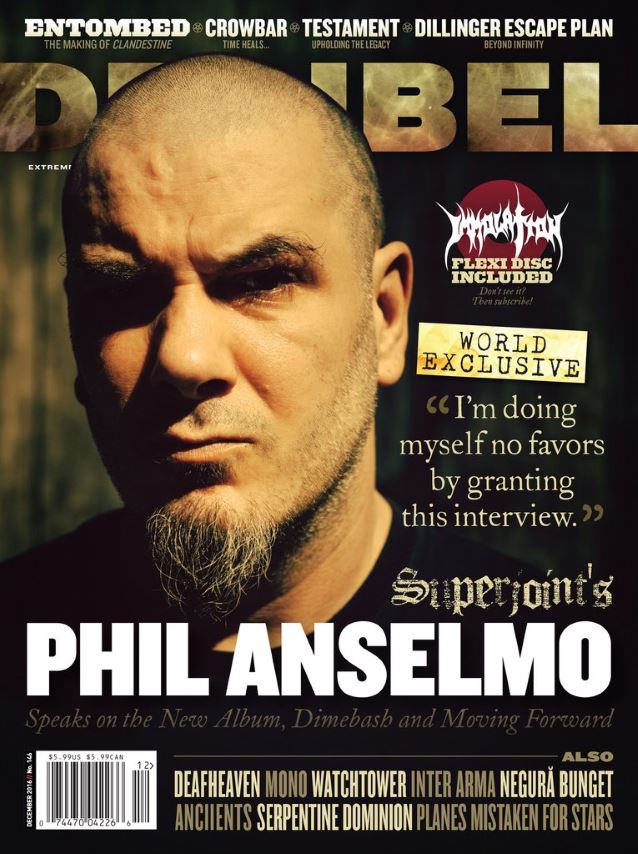