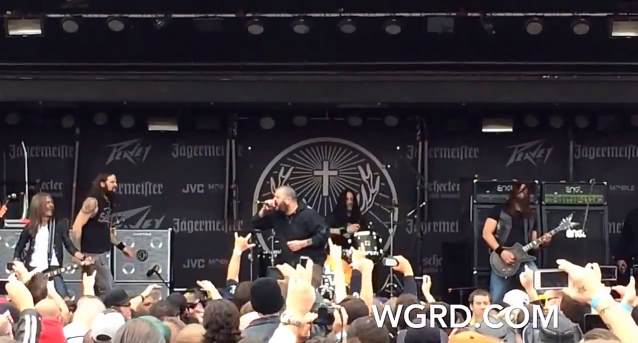 Iconic PANTERA and DOWN vocalist Phlip Anselmo joined KILL DEVIL HILL, the band featuring his former PANTERA and DOWN bandmate Rex Brown on bass, on stage yesterday (Friday, May 16) at the Rock On The Range festival in Columbus, Ohio to perform the PANTERA classic "Mouth For War". Video footage of the performance (courtesy of WGRD.com) can be seen below.

During a September 2013 interview with Artisan News, BLACK LABEL SOCIETY mainman Zakk Wylde was asked about the possibility of a hypothetical PANTERA reunion with him filling in for the late "Dimebag" Darrell Abbott on guitar. "It'd be up to [former PANTERA members] Vinnie [Paul Abbott, drums], Phil and Rex — they're the guys that make everything happen," he said. "So if they were all gonna do it and honor Dimebag and [if they said to me], 'Zakk, would you wanna honor Dime and do Dime's parts?' Of course, I was a pallbearer for him — I laid him to rest — so, of course, I'd say, it would be a beautiful way to honor him and stuff like that. And to celebrate all things PANTERA and what they achieved. 'Cause they changed the game, as far as extreme metal goes. I mean, they're the kings of it. But it's up to the fellows. Then it would just be me woodsheddin' 25-8, learning all of Dime's parts, you know what I mean?! Yeah, but like I said, as far as I'm concerned, it would just be honoring Dime. Like with the Yankees, you honor… everybody's wearing Thurman Munson's '15' for that day, just because we're honoring Thurman's greatness. So it's the same thing, man."

He added: "Without Vince, there's not any PANTERA reunion at all; it's useless. But he damn well knows my door's wide open. He needs to bust out the keys and unlock his, man. I'm waiting, but I'm not holding my breath."