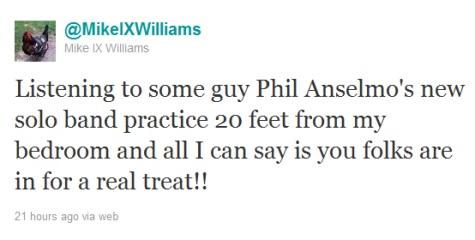 EYEHATEGOD frontman Mike Williams, who resides on Philip Anselmo's (DOWN, PANTERA, SUPERJOINT RITUAL, ARSON ANTHEM) 17-acre property in rural south Louisiana, revealed in a tweet yesterday (Thursday, January 19) that Anselmo is currently rehearsing with his solo project. Williams wrote, "Listening to some guy Phil Anselmo's new solo band practice 20 feet from my bedroom and all I can say is you folks are in for a real treat!!"

In a 2010 interview with Hellbound.ca, Anselmo stated about his upcoming solo album, "I'd been demoing, I guess about a year with this one kid on drums, just a local guy, a session guy. So I had, the basic skeletons for these songs sort of in place. You know, not married to one particular part or another. Then I did a whole lot of fine-tuning and I found a drummer that I wanted to jam with: the kid from WARBEAST (Joe Gonzalez),an excellent drummer, a great, great, great drummer. He does play thrash metal in WARBEAST but that doesn't limit him from all spectrums of heavy metal. He's very flexible and diverse, so it's awesome. I get the best of both hands and feet, if you will, out of a drummer. . . I'd say [I will play] about 99% [of the guitar parts on the album], for sure. I might have a couple of guys do some leads. I'm nothing great at leads, I'm kind of creative with themes but as a lead guitar player I'm pretty God-awful! Depending on the music, you know, I'm thinking this particular project might call for someone with a little more lead guitar talent."

He added, "You know, the supergroup thing has been beaten to death in the ground. I didn't want to just assemble this band, another band again, ala SUPERJOINT, ala DOWN, ala something I've done before. So, [this is a] total solo record. I wish I could play drums, though, I tell you that! But this kid is fucking insanely good, I would never aspire to be as good as this kid. He's fucking pretty incredible."

In a separate interview with Icon Vs. Icon, Anselmo said about the musical direction of his solo project, "Well, it's vicious. I have been in so many different side projects, I like to say that not all of them sound alike. With that being said, there is no way I would want to rehash anything traditional, so to speak. I'm gonna touch on tradition, ya know. Tradition is distorted guitar, drums, bass. But yes, I have been writing new stuff. Yes, it is super motherfuckin' aggressive." He added, "I know heavy music. I see where heavy music is. I want to take heavy music like a ball of clay and reshape it, if you catch me. Reshape it differently than it has been shaped before. That is where I am at right now."

Anselmo recently spent time at his barn studio, Nodferatu's Lair, laying down vocals on the six songs that will make up DOWN's new EP, due later in the year. The studio's name is a play on classic horror film vampire Nosferatu, altered to reflect certain musicians' tendency to nod off.