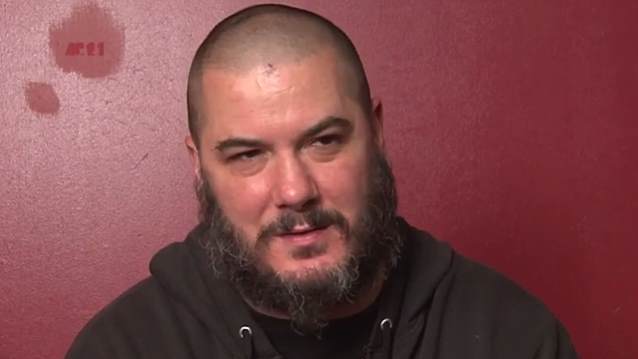 Christian McPhate of the Dallas Observer recently conducted an interview with former PANTERA and current DOWN singer Philip Anselmo. A couple of excerpts from the chat follow below.

On DOWN's new EP, "Down IV - Part Two", which sold around 10,000 copies in the United States in its first week of release to debut at position No. 23 on The Billboard 200 chart:

Anselmo: "For me, I think the songs are better. I think some of the stuff from the first EP were stuff left over from 2006. Shit like that. We got the material. We may as well release it and let people have it. But on the new EP, everything is really organic and off the cuff."

On DOWN's split with bassist Rex Brown and guitarist Kirk Windstein and addition of Patrick Bruders and Bobby Landgraf, respectively:

Anselmo: "For the core members left in DOWN — Jimmy [Bower, drums], Pepper [Keenan, guitar] and myself — who've been writing DOWN songs since 1991, to have guys like that [join the band], it's like a new lease on the whole DOWN vibe. It's great shit, man."

On his lyrical approach:

Anselmo: "I kind of like to paint a picture, so to speak, create an atmosphere. I never like to spoon-feed the listener and tell them exactly what songs were about or anything like that. I like people to read into them. Take away from it what they take away from it. Then, honestly, hear about it later, what their concepts are. It's like, 'Wow, I never thought about it like that.'"

Anselmo: "There's a pretty good percentage [chance that it will happen in Dallas], but then again you never know. Every show is a little different, brother. Since we've been out [on the road with BLS], it has been spur of the moment. We don't want to do the same fucking thing every fucking night. But I'll say BLACK LABEL SOCIETY has a pretty fucking good professional sound going on, and for them to throw down PANTERA, they deserve some credit for learning how to play the song and playing the fuck out of it."

Read the entire interview at the Dallas Observer.