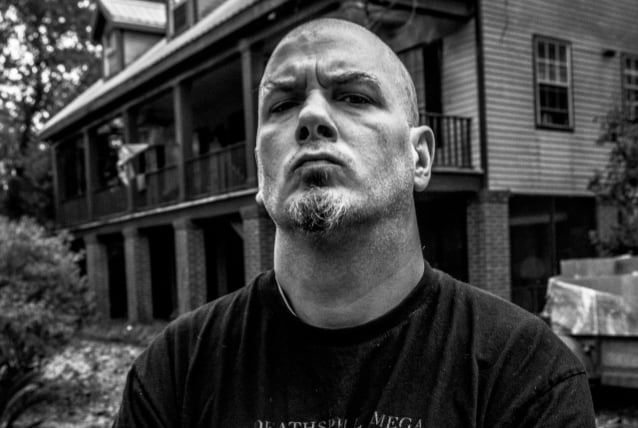 PHILIP ANSELMO Says He Is 'Anti-War': 'I Don't Like Guns Either'

In a recent interview with Brazil's Inside With Paulo Baron, former PANTERA singer Philip Anselmo spoke about the lyrical inspiration for "A Lethal Dose Of American Hatred", the 2003 album from his SUPERJOINT RITUAL project. "I was calling America out," he said (as transcribed by BLABBERMOUTH.NET). "That's what that record's about. The ignorance of the warmongering America. I'm against it, man.

"I was raised toward the end of [the] Vietnam [War]. I saw what Vietnam did. My mother told me explicitly what Vietnam was and what America was doing. She was a very young person — by the time she was telling me about all this stuff, she was probably 23 years old. And I was very young. And I lived, at the time, in the French Quarter [of New Orleans] with my mother, my aunt and her boyfriend. And her boyfriend had just come home from Vietnam. And he would wake up in the night screaming. So my mother had to explain to me the horrors of war early.

"So, with the SUPERJOINT record, yes, I was bashing America because we had just… I forget which war it was; it might have been Desert Storm or whatever. I might be wrong, but it's one of those damn wars, never-ending wars. I hate it. I hate it. And I hate that my home country are the biggest fucking bullies, man. I hate it. I fucking hate it.

The band's latest album, "Caught Up In The Gears Of Application", was released in November 2016 via Anselmo's Housecore record label. Since then, Anselmo and SUPERJOINT bassist Stephen Taylor have focused primarily on Anselmo's PHILIP H. ANSELMO & THE ILLEGALS solo project, which released its second album, "Choosing Mental Illness As A Virtue", in 2019.

Anselmo told Decibel magazine that SUPERJOINT was forced to drop the "RITUAL" from its name was "because there's a bloodsucking leech out there who took advantage of a situation. But we're all at fault as well for signing a document that basically has a zero sunset clause, meaning that this person is privy to a cut of any money a 'SUPERJOINT RITUAL' would make. Hence getting rid of the 'RITUAL,' coming back as SUPERJOINT and cutting out that cancer."