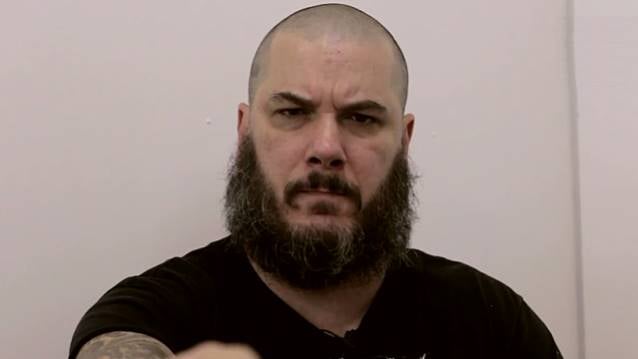 PHILIP ANSELMO Says METALLICA's 'Load' Album Should Never Have Been Released: 'It's A Terrible Record'

Former PANTERA and current DOWN frontman Philip Anselmo talked about some of the records that have had an impact on his life for the "Discs Of Doom" article in the latest issue of U.K.'s Metal Hammer magazine. Asked which album should never have seen the light of day, Anselmo replied: "I would have to say [1996's] 'Load' by METALLICA. I mean, it's a terrible record, man. I just don't get it. If you're gonna put out a record like that, just do a fucking side project or something, ya know?"

Anselmo first publicly critized METALLICA's "Load" in 2003, when he slammed the heavy metal giants for touring with supporting acts like LIMP BIZKIT and LINKIN PARK and challenging them to a road duel, head-to-head on any stage, telling an interviewer, "Heavy metal lies in the underground and if they're worried about... Why in the hell would METALLICA be worried about ticket sales? Bring out some fuckin' good bands." He explained: "That was due to a conversation [METALLICA frontman] James Hetfield and I had years ago when I was talking to him about their new album. I think that was when 'Load' was out, and it kind of shocked everybody — everybody was freaked out." Anselmo elaborated in a subsequent interview, claiming that METALLICA never would have shared a stage with PANTERA in the U.S. "because they know what would fuckin' happen. We would fuckin' eat them alive! That's the end of the fuckin' sentence. We would crush 'em." METALLICA drummer Lars Ulrich responded to Anselmo's challenge by saying, "Is he that desperate to tour? I love all these challenges. The ol' step it up...," and adding that Anselmo "has a tendency to talk a lot of horseshit most of the time."

Anselmo appeared to soften his tone by the time DOWN and METALLICA toured together in 2008, and two years later, Anselmo told Ultimate Guitar that he considered METALLICA to be "THE ROLLING STONES of metal" in terms of career longevity.

In a 2013 interview with Revolver magazine, Lars Ulrich was asked what he felt was METALLICA's most underappreciated release. "I think 'Load' and 'Reload' [1997] are great records," he replied. "They are creatively on par with every other record we've made. Obviously, they're bluesier records, and at that time, we were listening to a lot of LED ZEPPELIN, DEEP PURPLE and AC/DC, and we had a different kind of foundation than records before or after. And I understand that there are people who couldn't quite figure out what was going on with the haircuts and the rest of it, and that's fine. But musically, if you strip all that other stuff away, if you just listen to the 27 songs — 'Load' and 'Reload' were intended as one double-record — it's a great collection of songs that is on par with everything else that we've done creatively. But, I mean, who needs another person to sit there and argue about, you know, fucking 'Carpe Diem Baby'? They are different records, but that was the intention. [Laughs] It's not like we sat there and thought we were remaking '…And Justice For All'. [Laughs] We are obviously aware of that. But I think personally there's great songs on both of those records and I'm very proud of those records."