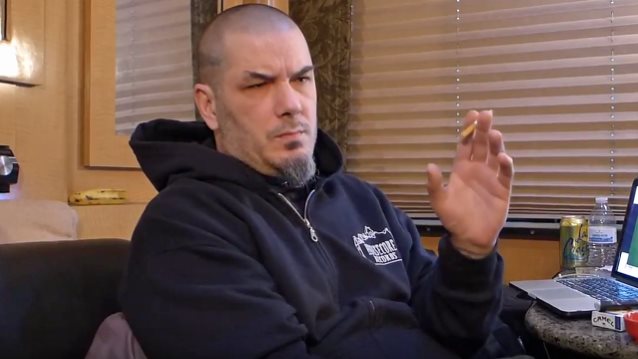 Metal Wani's Chuck Marshall conducted an interview with Philip Anselmo (PANTERA, DOWN, SUPERJOINT) before SUPERJOINT's January 22 concert at The Crofoot in Pontiac, Michigan. You can now watch the chat below. A couple of excerpts follow (transcribed by BLABBERMOUTH.NET).

On biased media coverage of political news and the negative aspects of social media:

Anselmo: "Shit, I can't even go to [the web site of] my local newspaper without seeing some bullshit divisive bullshit — I say again — article written with the blurring of linear time. And it's, like, man, no, I'm not buying into this. 'Cause, really, I just clicked on to this page to find out what the fucking New Orleans Saints [were doing]. It's, like, fuck! I don't need to read all this fucking shit, man. Just tell me who the fucking Saints are gonna sign. It's not that I'm against social media, but it's, like… There are imperfections, like with anything. Life is one giant imperfection, but still we deal and we cope. And I deal and cope with social fucking media, which is truly antisocial media. It'd be one thing if they could put out their divisive articles, but it's a whole another thing to put in a comments section. No matter what line of work you may be in — you could be writing about social climate of America in general, you could write about music, you could write about boxing, you could write about football — with the comments section, everybody's an expert, everybody's a mind reader, everybody is… You know, they know better than you do. And I'm calling bullshit. I'm calling absolute bullshit on that. I am."

Anselmo: "I'm sitting on five finished records right now — five. And they're all different, and they're all tripped out. Some's heavier, some's heavier than heavy, and then some is… not, I guess, sonically… I just woudn't be able to stuff it into the heavy metal category at all. I think it's the love of all the many genres… Honestly, it's a set of songs that have grown up with me since I was… some of 'em, Jeez, man, since I was, like, first able to pick up the guitar — little things that I had just written along the way. And these songs have grown up with me and hence had grown and the number of the songs had grown. And the input… Steve Taylor, the bass player from SUPERJOINT, is really an incredibly creative guitar player. He's my main man right now. I think this year… If I have to dump some free albums just to get this fucking music out, I'm gonna do it. So, one way or another… I'll just do it — just fucking do it. And, of course, we'll always have the hard copies and vinyl and stuff like that, for the collectors."

Anselmo: "There is a rumored jam session supposedly here in the next month or so, once we get off tour on this leg. We've got Bobby [Landgraf] out here with us, who's a guitar player in DOWN, obviously, and he's already given us a hand in it. And he's got a few pieces that he and I are working on. So it's always flowing. It's a wonderful thing."

On whether he thinks there will be new music coming from DOWN in 2017:

Anselmo: "I don't know about this… I don't know, man. You never fucking know. I don't know. Because, like I said, man, I'm gonna be… I think my point this year is that you're not gonna be able to stick me under a blanket. You're not gonna be able to throw a blanket over me; you're not gonna be able to put me in any little fucking box, musically or whatever. I'm gonna confuse the living fuck out of people — happily. And DOWN is a part of it as well, because DOWN, you can get away with all kind of stuff — fucking heavy metal songs, 'Stone The Crow'-type songs, and just basically acoustic [guitar] and me. Fuck, man, we write all kinds of, and types of, genres within genres within genres… all influenced by BLACK SABBATH."

On the culture of "V.I.P Packages," which seems to be the only way for fans to meet the bands they admire these days:

Anselmo: "It's up to the audience, really. It's there for them to indulge in if they'd like to. And if they do, then shit, man… I adore meeting great people, great people with stories, great people with advice on new music that might be out there, or if they wanna share stories about their back injuries, that's always fun. Just talk football, man. Just be real and be down to earth with fucking people, I love it — I fucking love it, man. It's a big difference than alone time before the gig, relaxing, being focused and walking straight to the stage, doing my job, coming off the stage, cooling down, and then stripping away all of that concentration, so to speak, and then it gives you that fucking opportunity just to sit back, be a regular motherfucker, toke a little bit of fucking weed, shake some fucking hands and fucking meet the people that are supporting you, because I love to remind them — and I mean this from the bottom of my still-ticking heart — the band doesn't choose the audience, the audience chooses the band. And, look, that's the truth of it, and that's how it works out. It works both ways; we work together on this. So when they say, 'Phil, man, your music means so much to me,' and shit like that, I have to retort and say, 'Sir' or 'madam' or 'young brother' or 'young sister, without your support, my songs and my existence and all that shit would mean zero; it would mean fucking zero. So constant, unending props to the true fans out there, and I mean that, man."

The new album from Philip's SUPERJOINT project, "Caught Up In The Gears Of Application", was released last November via Anselmo's Housecore record label.