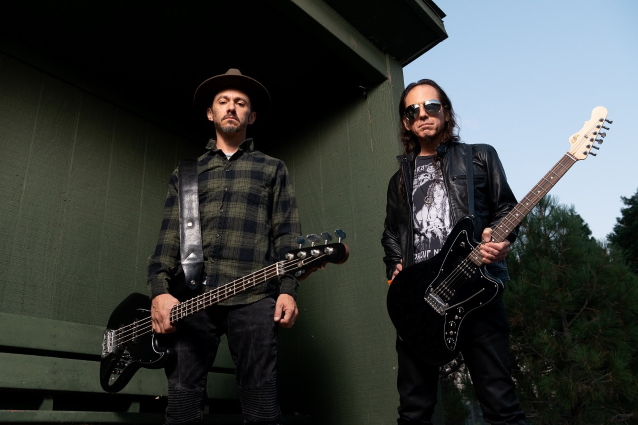 Metalville Records has announced the signing of Southern California avantgarde rock outfit PHILM. Comprising vocalist/multi-instrumentalist Gerry Nestler (CIVIL DEFIANCE) and bassist Pancho Tomaselli (WAR),PHILM will make its long-awaited return with its third album, "Time Burner", which is scheduled for a tentative February 2021 release. It will be the band's first album without the services of drummer Dave Lombardo (ex-SLAYER),who announced his departure in 2016.

States Nestler: "We are very pleased to be joining the Metalville roster for the release of 'Time Burner'. They are a solid company run by experienced industry veterans who know how to navigate in these challenging times and have everything in place to help us re-establish PHILM after being away for a time. We can't wait for the fans to finally hear 'Time Burner', which we think is our best, most well-rounded record yet. You can expect PHILM Mk II to be as heavy and uncompromising as ever, but we've also pushed our musical boundaries and innate eclecticism to new horizons."

"Time Burner" was recorded with engineer/producer Chris Sorem at Nest Recorders in Los Angeles and features Venezuelan-born, Grammy Award-winning guest percussionist Anderson Quintero on drums. PHILM has yet to announce a full-time drummer for the 2021/'22 "Time Burner" touring cycle.

Meanwhile, the song "Spanish Flowers" off "Time Burner" is featured in the eponymous animated short film directed by Ness Tomaselli and Fernando Yanes. Described as "a surreal, animated narrative involving a ritual of life and death carried out by two monks and a mourning priestess who is forced to let go of her mummified son," "Spanish Flowers" has been a selection at several notable film festivals and was the winner at the LA Independent Shorts Awards this past February.

This year, "Spanish Flowers" has also been selected into the LA Shorts International Film Festival animation category, to play along 61 other independent animated films from around the world. Accredited by the Academy Awards, BAFTA, and the Academy of Canadian Cinema and Television, the prestige of the LA Shorts Fest is unparalleled, ranking amongst the top International Film Fests in the world, and running strong for 24 years — officially making it the longest-standing shorts fest in L.A.