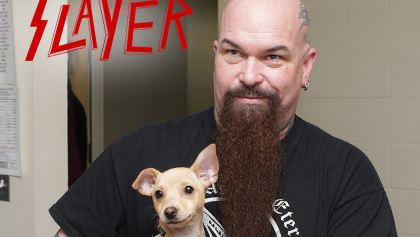 On Saturday, March 19, members of SLAYER and TESTAMENT spent time "hanging out and cuddling" puppies from the Motley Zoo animal rescue shelter in Redmond, Washington before the two bands' joint concert in Seattle.

A posting on the Motley Zoo Facebook page reads: "This was the second time we met [SLAYER's] Kerry King and Paul Bostaph, but this time we got to meet Tom Araya and Gary Holt as well. They are all huge fans of rescue and our mission, so they were happy to enjoy the puppy time. The guys from TESTAMENT were awesome too and we heard all about everyone's animals they couldn't wait to get home and see! This tour is almost over so they won't have to wait long!"

Several photos of SLAYER and TESTAMENT hanging out with Motley Zoo puppies — including one named Slayer — can be seen below.

SLAYERmade headlines in December 2014 when the band their entourage rescued a kitten in Indianapolis and placed it in a new home.

What's better than puppies and metal?! Nothing!!We were fortunate to spend Saturday night with Slayer, Testament and...