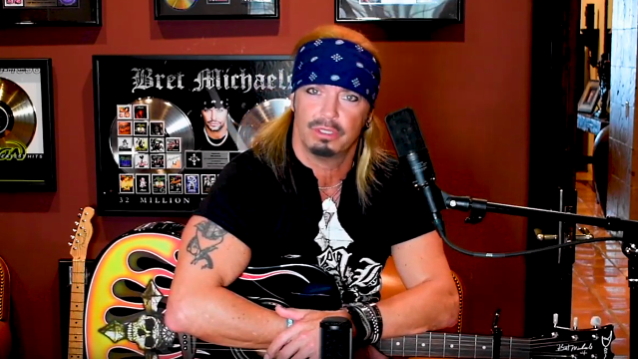 POISON's BRET MICHAELS On Future Of Touring: We All Wanna Get Back To The 'Old New Normal'

POISON singer Bret Michaelsspoke to TMZ about the future of concerts and sporting events, saying he's willing to strike a balance and compromise, as long as it's safe.

Michaels said he has seen clips from the first "socially distant" indoor concert during the pandemic — a Travis McCready gig in Arkansas — and said his band would gladly do the same, provided there are a few guarantees.

Asked when he would feel comfortable getting back on the road and performing in concert venues again, Bret said (see video below): "Here's the way I look at it. I take it very serious. Here's the health issue, besides myself, the big picture: it's gotta be healthy and safe for the fans, the bands, the crew, the first responders, the promoters, all food service, everyone that's working there, because we all — I'm speaking for myself, but we all wanna get back out on the streets. We all wanna get back to the 'old new normal.' And I think putting a concert on for people is great if people are gonna respect it and they can do it.

"For me, the minute I know it's a go and we can do this and it's safe and it's responsible, I'm there," he continued. "I'll backpack to the place — I don't care. I'm ready to go. The dream is it goes back to the old normal. You don't have to stop in the middle of 'Every Rose Has Its Thorn' and go, 'Hold on. There's six of you getting together. Step aside.' Let's be honest — that's gonna be tough. But we all may have to step up to the new normal for a while. So what we're gonna have to do is — and this is the hardest thing for a rocker to say — we're gonna have to find a balance and a compromise of respecting each other. So there's that balance, but there's also that compromise.

"I need to see a sporting event. If they have to be six chairs away to watch a baseball game, a football game, a basketball game, hockey, I'll do it, if that's what I have to do," he added. "But it's gonna be tough, 'cause me as a singer, I want everyone crushed up there, moshpit and singing, partying and having a great time.

"I wanna tell you a better answer. I don't know. But we're gonna have to all be as responsible as we can until we can step back into the old new normal."

Earlier in the month, Michaels said that he was still waiting to hear from concert promoter Live Nation about a possible postponement of POISON's "The Stadium Tour" with MÖTLEY CRÜE, DEF LEPPARD and JOAN JETT & THE BLACKHEARTS.

Most concerts and festivals have been canceled or rescheduled due to the coronavirus pandemic that is sweeping the globe. Shows aren't going to happen in May, and a number of major events that were slated to happen this summer have been called off. And with each passing day, more summer tours are in greater jeopardy of being scrapped, including "The Stadium Tour".

"The Stadium Tour" is currently scheduled to kick off on June 18 in Jacksonville, Florida. The 31-date trek will mark the CRÜE's first live dates since wrapping its 2014/2015 farewell tour, although it seems highly unlikely that large public gatherings will be viable again by the time the tour is slated to begin.