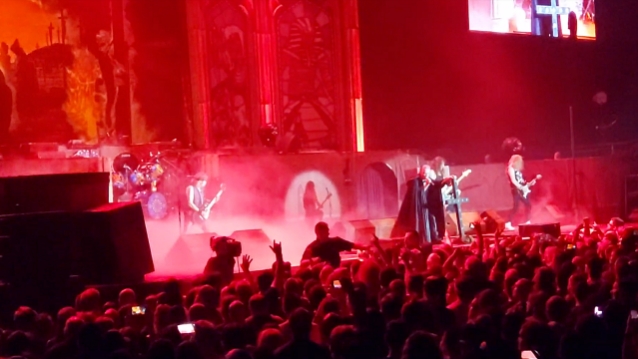 Tacoma police has disputed Bruce Dickinson's version of the incident that resulted in the IRON MAIDEN singer berating the security at the band's concert in the city Thursday night.

Dickinson stopped MAIDEN's show at the Tacoma Dome after he said security guards beat a fan. He told the crowd that the fan had "the shit kicked out him by 10 security guards." He added that he saw one security guard lean over a barrier and punch a kid half his size four times in the face.

She said the fan was arrested by Tacoma police for investigation of assault after security guards "engaged to remove (him)." He was then arrested and booked into Pierce County Jail on suspicion of assault.

"Safety is the number one priority at the Tacoma Dome with a focus on a positive experience for all," Bryant added in the statement.

The Tacoma Police Department told TMZ the fan — a 26-year-old male — was intoxicated and causing problems with other fans, and when he was asked to leave, he refused. He then allegedly punched a security guard, who called for police assistance. He was then removed and cited for the alleged assault — and he declined medical aid.

A IRON MAIDEN fan has uploaded video footage of the alleged altercation that led to the fan being ejected from the venue. The incident in question can be seen below beginning at around the 3:10 mark.

Dickinson said if fans had camera footage, he and his bandmates would be happy to help facilitate identifying the guards he described as bullies and "fucking criminals."