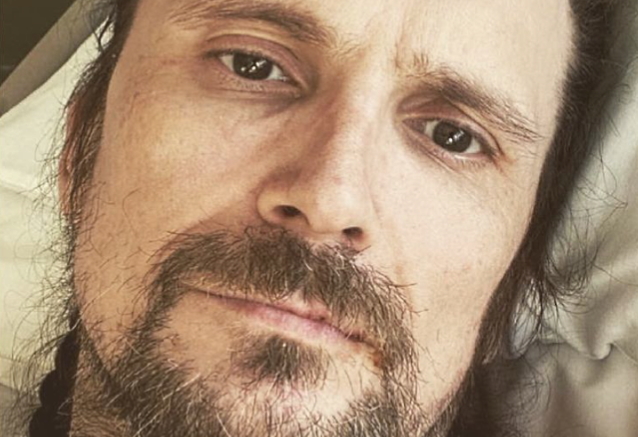 Jeff Becerra of Californian death metal pioneers POSSESSED says that he is "dealing with an infection" after recently undergoing flap surgery.

Jeff's operation essentially involved taking a section of skin with an intact blood supply and placing it over the injured area to repair a serious pressure sore he had developed from being wheelchair-bound for so long. Only severe pressure ulcers need flap reconstruction.

Late Saturday night (April 24),the 52-year-old musician shared a photo of him lying on a hospital bed, and he included the following message: "Week eight, post surgery didn't happen exactly the way we wanted. Dealing with an infection that popped up from where three incision points met. I'm hoping that with the help of strong antibiotics I can finally be ok for the first time in 11 years but it's challenging to say the least. I'm staying here until I am healed or I run out of options."

He continued: "The US Joint Commission on Patient Safety estimates that more than 2.5 million patients in acute-care facilities suffer from pressure ulcers, and that 60 000 die from pressure ulcer complications each year. #jeffbecerra #possessed #wheelchair #musician #disabilityawareness (at Reno, Nevada, U.S.A)

Earlier in the month, Becerra described his flap surgery in detail in a separate post, saying it "essentially is cutting out a large spot of flesh from my tailbone all the way down to the bone, grinding down the bone and removing all the dead bone. After that, a horseshoe shaped incision is cut all the way around my buttocks and filleted, then a slash up the side towards my back to allow the entire piece to pivot over to cover the wound. The entire thing is then stitched together from the inside, again stitched mid flesh, and stapled together all the way around."

POSSESSED originally split in 1987, leaving behind a short but highly influential legacy, most notably their 1985 "Seven Churches" debut, widely considered to be the first-ever death metal album. Internal tensions after the release of 1987's "The Eyes Of Horror" EP led to the band's dissolution, with guitarist Larry Lalonde joining Bay Area tech-thrashers BLIND ILLUSION, then PRIMUS, while vocalist/bassist Becerra, guitarist Mike Torrao and drummer Mike Sus each going separate directions.

Two years after POSSESSED's split, Becerra was the victim of a failed armed robbery attempt, subsequently leaving him paralyzed from the chest down and sending him into a spiral of drug and alcohol abuse. POSSESSED was reactivated by Torrao in 1990 with a completely different lineup, but only released two demos before dissolving in 1993. Becerra then reformed POSSESSED in 2007 with his own lineup, which released its first studio album in 33 years, "Revelations Of Oblivion", in May 2019.