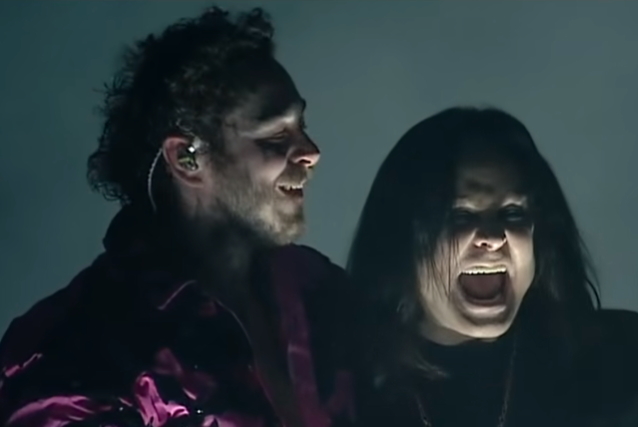 POST MALONE 'Had No Idea' OZZY OSBOURNE's Condition Was That Serious

The rapper made his comments to Rolling Stone a week after the BLACK SABBATH singer revealed that he had been diagnosed with Parkinson's disease.

Malone, who shared the stage with Osbourne at the American Music Awards in late November, admitted that he "had no idea" the legendary heavy metal frontman's condition was that serious. "Working with him and hanging out with him and being around him, you can't tell," Malone said. "You can tell he has a little difficulty getting around, but he's so strong."

Post said he is looking forward to more music from the 71-year-old, whose new album, "Ordinary Man", is due out on February 21. "I know he's been working on a new project with a bunch of my friends, [and] I'm really excited for him because he's so passionate about it and it sounds incredible; he sounds incredible," he said.

Last week, Ozzy's wife Sharon explained to "Good Morning America" that Ozzy has "PRKN 2, which is a form of Parkinson's. There's so many different types of Parkinson's. It's not a death sentence by any stretch of the imagination, but it does affect certain nerves in your body. It's like you have a good day, a good day and then a really bad day."

Sharon said that Ozzy will head to Switzerland in April to see a professor who specializes in helping people with their immune systems, in order to distinguish between her husband's symptoms. Sharon remarked: "We're going to go wherever we can go to seek answers," to which Ozzy added: "We're lucky enough to be able to afford to do that."

Ozzy is scheduled to return to North American arenas for another leg of his "No More Tours 2" tour this spring.