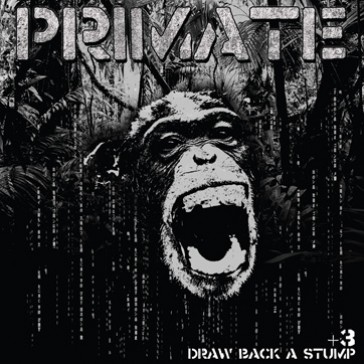 The lyric video for the song "Pride" from Atlanta-based thundergrinders PRIMATE can be seen below.

Having signed with Relapse Records last year, PRIMATE will formally unleash its debut LP via the label next month.

After seeing a limited release by the band directly via a 1,000-run CD pressing in March 2011, PRIMATE's crushing "Draw Back A Stump" will receive an official worldwide Relapse release on July 3 on CD, LP and deluxe digital download. The seven hymns from the initial version now include additional rhythm guitars and have been remixed and remastered, and are joined with three additional previously-unreleased bonus tracks on this edition.

An all-star band comprised of extreme music scene vets hellbent on delivering Grade-A punk the likes of which has not been set loose on the ears of the world since the glory days hardcore, PRIMATE channel decades of international extreme music influences into a glorious record of hellish rage all their own. Upon its initial release Decibel magazine praised "Draw Back A Stump", calling it "grind with elements of classic U.K. crust, Swedish D-beat and American hardcore, plus just enough experimentation to create the aural equivalent of a watch throwing springs and gears in every direction while keeping perfect time," with Metal-Army America adding "'Draw Back A Stump' has all the bells and whistles of old-school hardcore and the best of modern sludgey-grind" and Grind To Death boasted the record is "like no other grind I have heard...borrowing from the crisp clean metal stylings and structures merged with the rhythmical pogo stick bouncings of punk to make its own blend of music."

"Draw Back A Stump" track listing: