"We have returned from five days at the studio with acclaimed producer Russ Russell (NAPALM DEATH, DIMMU BORGIR). He has mixed the [second PRIMITIVE GRAVEN IMAGE] album into a GREAT shape, and helped with additional production, recording, arrangements and general FUCKING up.

"This collection of eight songs that we call 'Celebrating Impending Chaos' are a VERY interesting bunch indeed. Straying away from the strict black metal style of our earlier work, expect huge riffing, crazed vocals, spoken passages, prog PSYCKKK-outs (complete with minimoogs), guitar solos left right and centre and more melody than you shake a huge black metal pole at. Our mission now is to seek out the right home for this beast, so that we can release it onto you unsuspecting public."

Check out footage from the studio below.

PRIMITIVE GRAVEN IMAGE's debut album, "Traversing the Awesome Night", was released in the U.S. in April 2007 on Open Grave Records. 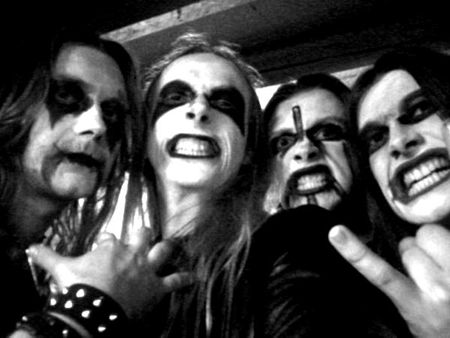