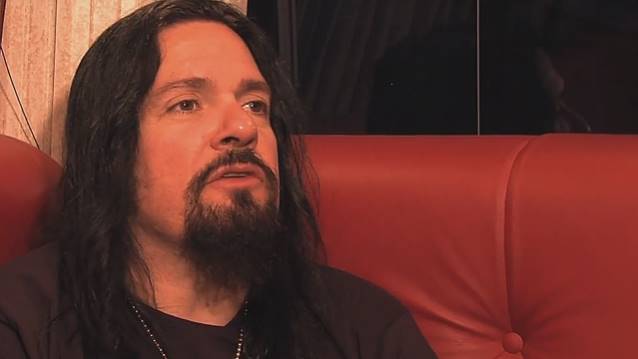 PRONG's TOMMY VICTOR: 'Money In Metal These Days Is Hard To Come By'

Jerel Johnson of Target Audience Magazine recently conducted an interview with PRONG guitarist/vocalist Tommy Victor. A couple of excerpts from the chat follow below.

Target Audience Magazine: The gap between "Carved Into Stone" and "Ruining Lives" is the shortest in 20 years. Was PRONG on a creative kick after "Carved"?

Tommy: I signed a record deal and I agreed to do another record. I was committed to this and the priority was doing this and having a "day job" with DANZIG put wrench in it and that delayed it. Then there was a problem with bandmembers. It was contractual, and I agreed to that, and PRONG needed to do consistent records from this time now on. There are not a lot of bands from that era, and this may be a purpose in my life. I don't know.

Target Audience Magazine: I've noticed that PRONG has had a lineup change. Who are the two new members of the band?

Tommy: They aren't really new. Jason Christopher, the bassist, has been touring with us for two years since (former bassist) Tony Campos didn't tour too much. Alexei got a day job as a music programmer and Art Cruz filled in for him. Money in metal these days is hard to come by so I have to adapt to these situations, and that's how it's been.

Tommy: Actually, on the record, Chris Collier, who is a studio cat and a great engineer in his own right, did all the studio tracks. Chris is the main force on this record, as is producer Steve Evetts. It was a godsend to find this guy. Art Cruz kicks ass, too, as did Alexei, so I've been on a lucky streak finding these amazing drummers. It's been fantastic.

Target Audience Magazine: Did you record "Ruining Lives" like "Carved Into Stone" or was it different?

Tommy: We did it in a different studio and worked on the songs as we went along. It was a more condensed version of how we record "Carved Into Stone". We did the vocals in Evetts' studio. Evetts has made some huge upgrades with the studio and I noticed the differences on this record. It's a more condensed version. I think we worked faster because I'm used to Steve's method operation so I didn't question his approach to the vocals and guitar overdubs.

Target Audience Magazine: Do you think metal in the U.S. is on the decline?

Tommy: I think everything is cyclical. I tend to believe that. It's hard to really be positive about it right now, but that's why having good songs and having a record like "Ruining Lives" is important for metal because there's no concentration on yelling screaming and violence. It has that, but there is a focus on songs and a positive message. I think that if there are bands making quality stuff, then it can change. But if hordes of bands make garbage and the labels support it, the scene will crumble. Now the labels don't have any control; now kids will pick up a guitar and make a record that sounds like everything else and release in their home studio using Pro Tools then people will say, "Metal sucks." The same thing with rap or R&B. Because everyone has a home studio and think they're rappers, but they're just suburban kids with money.