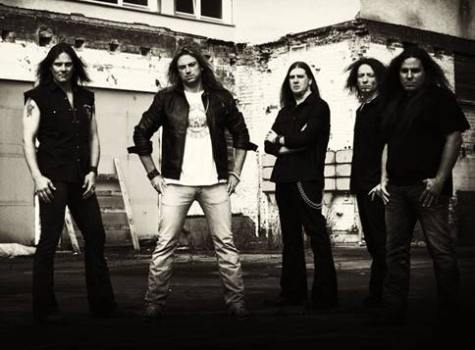 PUMP, the German heavy rockers featuring ex-BRAINSTORM singer Marcus Jürgens, are working on their fourth album, tentatively titled "Waiting For The Rapture", for a late 2012 release.

A rough-mix version of a new PUMP song, "Halo (I Don't Care)", can be streamed using the SoundCloud player below.

PUMP was formed in February 2002 by a group of talented, hard-working musicians. Tired of being told what type of music they should play, PUMP decided to go against the pervasive grunge/nu-metal grain to write the hard rock music they love in the vein of SKID ROW, TESLA, WHITESNAKE, AEROSMITH and DOKKEN.

The guitar team of Marcel "Selly" Bernhardt and Aki Reissmann each bring his own unique guitar style to this hard-driving mix: bluesy, yet melodic with a heavy twist. Bassist Michael Vetter and drummer Andreas Minich provide the solid, rhythmic foundation on which the music is built.