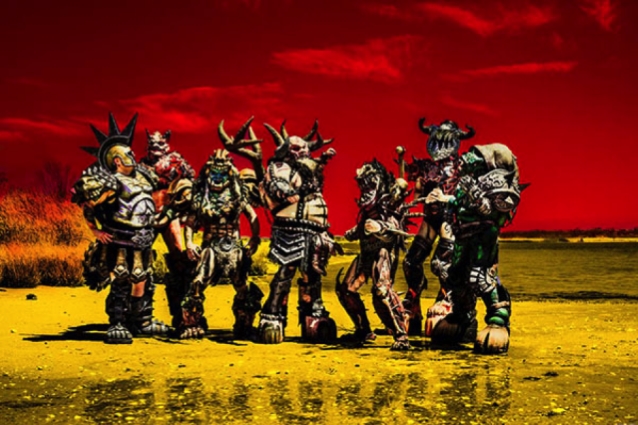 Heather Clayton of Bullet Music conducted an interview with GWAR guitarist Pustulus Maximus (real name: Brent Purgason) prior to the band's November 3 concert at Masquerade in Atlanta, Georgia. You can listen to the entire chat below. A few excerpts follow (transcribed by BLABBERMOUTH.NET).

On how GWAR would like to eradicate the planet:

Pustulus: "I'd say any kind of stabbing would be good. Make no mistake — we're not trying to kill humanity to preserve the earth because that would insinuate that we care about the earth. We care about nothing other than self-pleasures and shit like that. We're selfish. We're selfish. We really just want this place all to ourselves. We created humanity and it was a big mistake. Just like every other mistake, we want to do a little late-term abortion, so to speak."

On using a sword and battle hypothetically to kill the president in the song "El Presidente":

Pustulus: "That's probably my favorite. Sword and battle axe. It's a swinging motion. You have to put a lot of force into it. Guns, rifles and things of that nature, you don't get the cathartic release of aggression by moving a finger toward a trigger. Let's say you have to take a deep breath and swing a weapon, that's very freeing, fulfilling, it's a fulfilling warm, sensation."

On how many gallons of blood GWAR goes through during a given show:

Pustulus: "I don't know about gallons, but it's 259.3 cubic liters. We don't use the standard system. It's the metric. There's only two places in the world that use standard. It's not very standard if you ask me."

On whether GWAR would ever release their own video game:

Pustulus: "We've thought about a lot of things, but apparently there's no money in it. I mean, I would love to have a video game. I think we've had some prototypes, but I guess they're too gory. What we need, you need to throw us in Mortal Kombat or something. They got fucking Batman in there. Batman is not GWAR. So, why not have us?"

On whether GWAR is working on the follow-up to 2017's "The Blood Of Gods":

Pustulus: "We have a fuck-ton of songs in the bank, so I'd have to say as soon as we get back from this tour, it's time to start writing. Then again, who am I? Who am I to say? I'm just a lowly, lead, handsome guitar player in the band."

"The Blood of Gods" was released in October 2017 via Metal Blade. The disc was produced, recorded, mixed and mastered by Ronan Chris "Lord God" Murphy and was made available in standard CD, 2LP colored vinyl and digital formats.