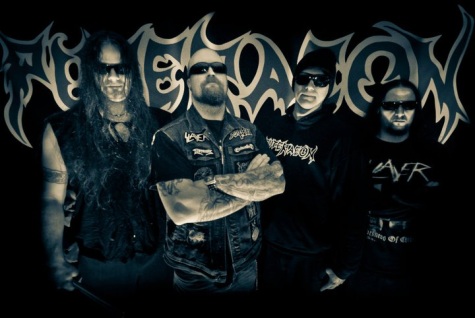 Swedish death metallers PUTERAEON have entered RZA Mobile Recording to begin recording their sophomore album, "Cult Cthulhu", for a May release via the German label Cyclone Empire. The 11-song follow-up to last year's "The Esoteric Order" is being tracked with sound engineer Kristian "Risza" Isaksson (EVERGREY, HARDCORE SUPERSTAR, PSYCORE, RECLUSION, NOTRE DAME) and will once again be mixed by KING DIAMOND guitarist Andy La Rocque at his Sonic Train Studios in Varberg, Sweden.

A 10-minute video clip in which the PUTERAEON members answer fan-submitted questions can be seen below. Also included is a pre-production recording of the band's new song "Children Of Dagon".

Coming from the Gothenburg area, PUTERAEON caused quite a bit of a stir with its three demo CDs, "Fascination For Mutilation", "The Requiem" and "The Extraordinary Work Of Herbert West".

PUTERAEON was spawned in 2008 by mainman Jonas Lindblood (TAETRE, THORIUM),who states the following: "I started doing some riffs that took me back to my roots in death metal, the glorious early '90s!"