Canadian gore grinders PUTRESCENCE have posted four songs from their forthcoming fourth full-length release, "Sledgeahmmer Holocaust", on their MySpace page. The CD version of this gruesome effort will be made available on October 31 via No Escape Records. An LP version, to be co-released by Rescued from Life Records and War on Music Records, will see the light of day in early 2009.

The track listing for "Sledgeahmmer Holocaust" is as follows:

01. Machete Through Head Like Knife Through Butter
02. Sledgehammer Holocaust (Shit And Bone Infused)
03. Malefic And Uncontrolled Demolition Of The Living
04. Eye Sockets Venting Black, Rotten Blood
05. Gutted, Coated With Malignancy And Re-Emboweled
06. Forced To Ingest Caulking Up Nose And Down Trachea
07. The Super Flying Off A Roof Happy Show
08. Moonlight Illuminates Limbs Forced Into Impossible Directions
09. Ukulele Players Drugged Out Machete Attack At The Flea Market
10. I Am Your Flesh
11. The Slabby And Crimpy Ascension Up The Snivelling Shit
12. Halved And Preserved For Further Ritualistic Abuse
13. Hillbilly Savants: Quiet Dignity And Delicate Relationships
14. Q: Mutilated With Chainsaw? A: Split With Maul And Cannibalized

The album artwork was created by Wes Harrisson.

PUTRESCENCE will team up with FUCK THE FACTS and IMPALED for a Canadian tour dubbed "The Great Blighted North" beginning on November 5 in Winnipeg. 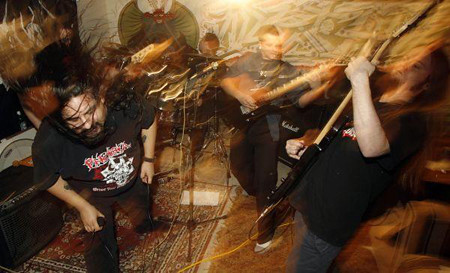