Hooking up virtually between the U.K. and Los Angeles, QUEEN's Brian May and Roger Taylor and singer Adam Lambert have recorded a new version of QUEEN's classic "We Are The Champions". Widely regarded as one of the most instantly recognizable anthems, it was this same song QUEEN + ADAM LAMBERT played for their first performance together on the May 2009 "American Idol" finale.

May and Taylor have been performing pop-up concerts from their respective homes while in lockdown and the seeds of this new May, Taylor and Lambert version of "We Are The Champions" were sown when May posted a MicroCon invitation to jam with him on the classic QUEEN track on his Instagram. Taylor was first to respond, followed by Lambert who in his at-home performance changed the lyric mid-song to "You Are The Champions".

Overwhelmed with calls for the track to be made available to download, the resulting "virtual jam" version, now titled "You Are The Champions" and additionally featuring band bass player Neil Fairclough, is available now on all streaming and download services.

Proceeds raised from the track will go to the COVID-19 Solidarity Response Fund for the World Health Organization (WHO),powered by the United Nations Foundation. The Fund provides tools and resources to health workers on the frontlines globally, including PPE, testing kits, trainings, and more. Additionally, the Fund supports the rapid development of a vaccine and theraputics.

As the unfolding coronavirus outbreak has forced QUEEN + ADAM LAMBERT to reschedule their 27-date European tour to 2021, it's hoped this new "We Are The Champions" will also provide some consolation for disappointed fans.

Since its initial release in October 1977, the Freddie Mercury-penned "We Are The Champions" has become a victory parade anthem uniting sports terraces and on-field celebrations the world over. This enduring anthem is frequently heard at the winning line of motor races and has also become synonymous with track and field events, soccer and baseball championships and even (without endorsement) at presidential campaign rallies.

Freddie said of "We Are The Champions": "I wanted to write something that everyone could sing along to. And at the same time, I thought it would be nice to have a winning song that's meant for everyone."

"By each playing our part and addressing the difficult times we are all sharing we will win this challenge," the band says. "During this time our thoughts and thanks are with those dedicated medical heroes standing up to the battle daily on our behalf. They are the champions. You are the champions."

Says May: "It seems to me we should dedicate this one to all the front-line soldiers fighting for Humanity against the insurgent coronavirus. Just like our parents, grandparents, and great grandparents who fought for us in two world wars, those brave warriors in the front line are our new CHAMPIONS. That means the doctors, nurses, cleaners, porters, drivers, tea-ladies and gentlemen, and all who are quietly risking their lives daily to save the lives of our kin. CHAMPIONS ALL!!!"

Says Taylor: "As a father with a daughter in the front line, I am ultra-aware of the vital work they are doing daily to save us and our society. Their bravery and sacrifice must not be prejudiced by anything less than a one hundred per cent effort by our governments to protect them. They are precious to us all and they are truly our champions."

Says Lambert: "It is with the deepest gratitude to all those on the frontline all over the world that we dedicate our performance. Thank you for keeping us safe, we are in awe of your bravery and strength."

"'We Are The Champions' has always been a rallying cry," said Elizabeth Cousens, president and CEO of the UN Foundation. "We are grateful to QUEEN and Adam Lambert for using their talents to support our heroes on the frontlines of the COVID-19 response. Their contribution to this fight will lift spirits and raise critical funds for the COVID-19 Solidarity Response Fund for the World Health Organization."

QUEEN + ADAM LAMBERT's "You Are The Champions" will be available from today across all streaming and download services. 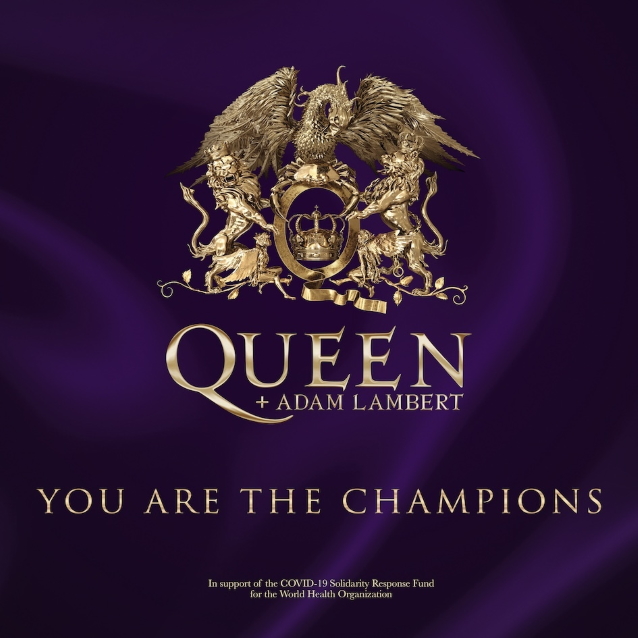