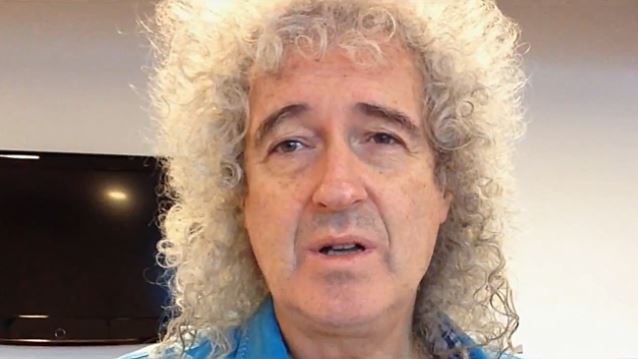 Iconic British rockers QUEEN have slammed Republican presidential hopeful Donald Trump for once again using the band's 1977 song "We Are The Champions" without permission.

When Trump took the stage at the Republican National Convention in Cleveland on Monday, he emerged in front of a blinding backdrop of white lights as a lectern rose from the floor. All the while, "We Are The Champions" could be heard throughout the arena.

"Sony/ATV Music Publishing has never been asked by Mr. Trump, the Trump campaign or the Trump Organization for permission to use 'We Are The Champions' by QUEEN," the statement read. "On behalf of the band, we are frustrated by the repeated unauthorized use of the song after a previous request to desist, which has obviously been ignored by Mr. Trump and his campaign.

"QUEEN does not want its music associated with any mainstream or political debate in any country. Nor does QUEEN want 'We Are The Champions' to be used as an endorsement of Mr. Trump and the political views of the Republican Party. We trust, hope and expect that Mr. Trump and his campaign will respect these wishes moving forward.”

But Sean Spicer, communications director for the Republican National Committee, disputed QUEEN's claim, saying that "@GOPconvention paid to license the use of song in the arena #RNCinCLE."

QUEEN guitarist Brian May (pictured) previously voiced his displeasure over Trump's use of "We Are The Champions" in June. He wrote at the time: "I can confirm that permission to use the track was neither sought nor given. We are taking advice on what steps we can take to ensure this use does not continue. Regardless of our views on Mr. Trump's platform, it has always been against our policy to allow QUEEN music to be used as a political campaigning tool."

In the "Letters" section of his site, May doubled down on his unfavorable opinion of QUEEN's association with the billionaire mogul. He wrote: "We certainly have not approved this use of ['We Are the Champions']. I will make sure we take what steps we can to dissociate ourselves from Donald Trump's unsavoury campaign."

May isn't the first rock musician to distance himself from Trump. TWISTED SISTER singer Dee Snider recently revealed that he asked Trump to stop using the band's signature anthem "We're Not Gonna Take It" as the "exit song" at the politician's campaign stops, explaining that he couldn't "get behind a lot of what [Trump is] saying."