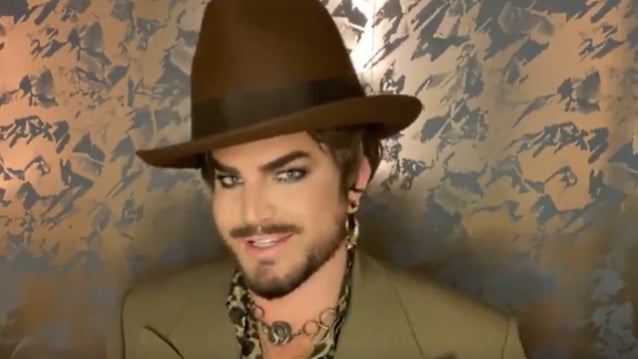 Adam Lambert has once again slammed Donald Trump, saying his presidency "was a disaster from day one."

The QUEEN singer and former "American Idol" runner-up discussed the real estate mogul during an appearance on "Good Morning Britain" before Joe Biden and Kamala Harris were sworn in as president and vice president, respectively, on Wednesday (January 20).

Speaking about the job facing the Biden/Harris team, Lambert said: "It is a tall order. I think that [Biden] needs to heal the country as best he can. And Kamala Harris by his side, I think, is an amazing panel for them to move forward and try to fix what's broken. Also, I feel like in many cases, anything is better than what we've experienced in the last four years [laughs], so ever since the election, I've been just trying to tune out the chaos that is Trump. Obviously, we can't fully ignore him, given what happened at the Capitol. I just hope that the public and the media don't give him nearly as much attention as he's been whoring about."

Adam also defended Biden, who has been lambasted for, among other things, his age, memory, and speech. America's 46th president has spoken publicly about his childhood experiences with stuttering and annotating his speeches to help with fluency.

"Obviously, public speaking is a big part of being president of the United States — no one's gonna argue that," Lambert said. "But in addition, I think it's also about listening to people, it's about putting together the right cabinet who can get the job done.

"How many people did Trump fire in four years? It was a disaster from day one," Adam insisted. "Not just this last year since COVID; it was a disaster since day one. So I think that with Biden and Harris leading the way here, I think they're gonna put together an appropriate cabinet to make the changes that we need, to heal the country, to help combat the COVID virus. I'm very hopeful that things are only gonna get better from here."

Lambert went on to say that he understands why voters would long for stability and a return to the status quo that Biden and his nearly five decades of federal government experience represented after nearly four divisive and drama-filled years of the Trump administration.

"We have to keep in mind that he's been in politics for so long, he knows how to work the system to try to get what we need," the singer argued. "I think we just dealt with four years with somebody that was being viewed as this outsider that'll shake things up. Well, he shook things up, but he didn't know what he was doing, so he kind of crashed the car. And I think now we're gonna have somebody that knows how to drive again."

Prior to the 2020 presidential election, Adam was frequently critical of Trump's policies on Twitter.

Last May, Lambert blasted Trump's response to COVID-19, saying "when he has a press conference and he speaks, it just makes things worse. So if he would just maybe let the professionals, the medical professionals, step in, I think if he delegated a little bit more responsibly, that might be good."

In June, Lambert called out Trump for his failure to "even try to act presidential amidst the chaos" over the death of George Floyd. He said: "Political views are one thing. Xenophobia and racism are not things I tolerate."

'They will make the changes we need.'


Asked what Joe Biden can do now, @adamlambert tells @piersmorgan and @susannareid100 that Biden will need to 'heal the country as best he can.'

He adds that in many cases 'anything is better than what we've experienced in the last 4 years.' pic.twitter.com/hdubOwh6yr