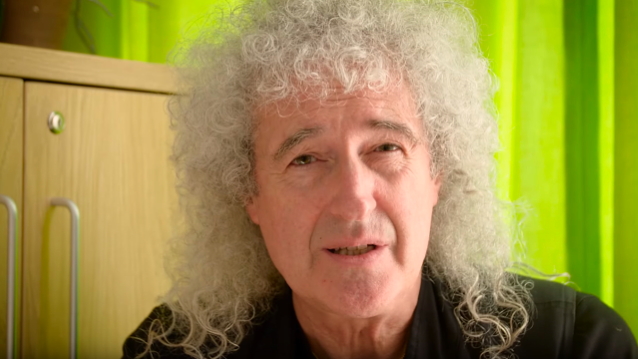 QUEEN guitarist Brian May has blasted "predatory press hacks" for "subtly twisting" his words with regard to his comments involving the trans community.

Speaking to The Mirror newspaper at ITV's Palooza event in London on November 23, May was quoted as saying he believed QUEEN "wouldn't be considered diverse enough" if he and his bandmates started out today. He reportedly added he was "very uncomfortable about some of the decisions that are being made out of fear."

However, the 74-year-old rocker has since taken to social media to claim he was "ambushed" and he insisted he didn't mean to cause offense. In an Instagram post, he wrote: "I was ambushed and completely stitched up by a journalist at the recent ITV event. And it's led to a whole mess of press stories making it look like I'm unfriendly to trans people. Nothing could be further from the truth. My words were subtly twisted. I should have known better than to talk to those predatory Press hacks.

"Sincere apologies to anyone who has been hurt by the stories," he continued. "My heart is open as always to humans of all colours, all creeds, all sexes and sexualities, all shapes and sizes - and all creatures. We all deserve respect and an equal place in this world. And my grateful thanks to all of you who stepped up to defend me in the last couple of days. It means so much that you have faith in me."

In his red-carpet interview at the ITV event, Brian reportedly said: "I feel very uncomfortable about some of the decisions that are being made, often out of fear. Because people are so afraid of being called out. It is a horrible atmosphere.

"I am sure if QUEEN started now we would be forced to have people of different colors and different sexes and a trans [person], but life doesn’t have to be like that. We can be separate and different."

In a separate interview with the Sun about whether abolishing the single-sex categories would disadvantage female artists, May reportedly told the newspaper: "I honestly don't know if it disadvantages one group but it's a decision that has been made without a lot of thought. I don't know what the long-term consequences are. A lot of things work quite well and can be left alone. I think some things need to go back.

"What matters is justice and equality of opportunity, no matter who you are, and that is actually not happening at the moment as everyone is jumping to conclusions and everyone is scared of doing the wrong thing," May added. "I do find it very uncomfortable. I don't think things are going very well, I have to say."

After May's original comments were published, a number of Twitter users slammed the guitarist, with many pointing out that QUEEN was originally fronted by Freddie Mercury, a queer person of color living with HIV.