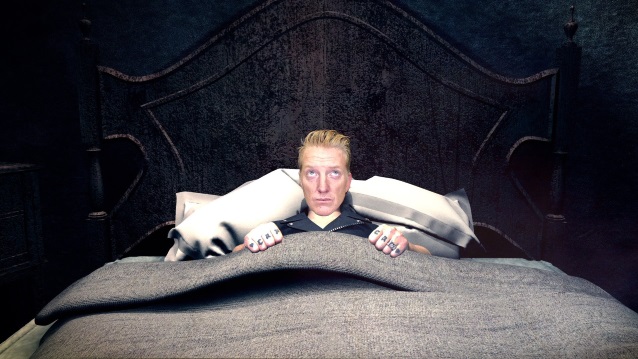 QUEENS OF THE STONE AGE's video for the song "Head Like A Haunted House" can be seen below. Directed by frequent collaborator Liam Lynch, the clip is a ghastly animated carnival ride through your worst fever-induced nightmares. Accompanied by disembodied hands, UFOs, smoldering hellscapes and grooving skeletons, Joshua Homme leads the way as he and his pack of mischief-makers sail through the nighttime sky on what else but flying coffins.

After a triumphant South American jaunt with brothers in arms FOO FIGHTERS, QUEENS OF THE STONE AGE will make their return to the U.S. later this month with stops including Austin (Austin360 Amphitheater) and Irving (The Pavillion at the Irving Music Factory) as well as Miami's Bayfront Park Amphitheater, but not before kicking it all off with two sold-out nights at San Diego's Observatory North Park.

In addition to the slew of upcoming North American and European dates, QUEENS OF THE STONE AGE will be headlining this summer at London's Finsbury Park on June 30 — and they're bringing friends. The band has curated a special lineup with guests including Iggy Pop, RUN THE JEWELS, THE HIVES, Brody Dalle, and more.

QUEENS OF THE STONE AGE are touring in support of their seventh studio album, "Villains", which was released last August via Matador Records. The LP debuted at No. 1 in the U.K., Australia, Canada, the Netherlands, New Zealand, Switzerland and Portugal, No. 2 in Germany, Austria, Belgium, Finland, Norway and Ireland, No. 3 on the Billboard 200, No. 4 on Japan's international chart and No. 5 in Italy.