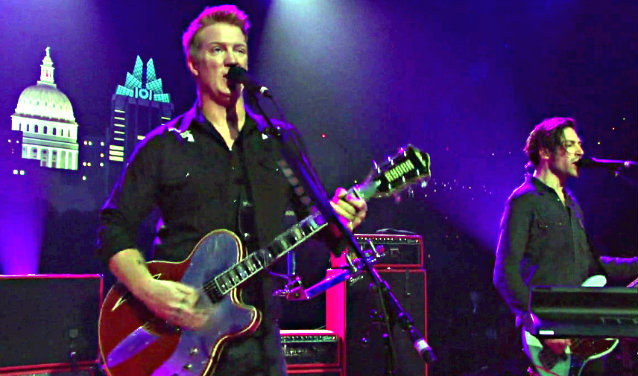 "Austin City Limits" rings in the New Year with new episodes, starting the second half of Season 39 with an electrifying hour from rock innovators QUEENS OF THE STONE AGE. Recently nominated for two Grammy Awards for "Best Rock Performance" and "Best Rock Album", QUEENS OF THE STONE AGE prove they're one of the best bands today in a dynamic, full-hour performance. The new episode premieres Saturday, January 4.

Video footage of QUEENS OF THE STONE AGE performing the song "Smooth Sailing" on "Austin City Limits" can be seen below.

QUEENS' frontman Josh Homme appeared on "Austin City Limits" back in 2009 as part of the supergroup THEM CROOKED VULTURES (alongside Dave Grohl and John Paul Jones),but in this appearance he makes his long-awaited "Austin City Limits" debut with QUEENS OF THE STONE AGE, the band he's led for nearly two decades.

"Josh Homme is a genius, and he's made QUEENS OF THE STONE AGE one of the best rock bands of our time," says "Austin City Limits" executive producer Terry Lickona. "They make some serious rock and roll, but without taking themselves too seriously."

"Austin City Limits" is a television series on PBS that records and broadcasts original musical performances from exciting new talent and legendary artists of all genres.

"Austin City Limits" is the longest-running music series in American television history and remains the only TV series to ever be awarded the National Medal Of Arts. The historic KLRU Studio 6A, home to 36 years of "Austin City Limits" concerts, has been designated an official Rock And Roll Hall Of Fame landmark. In 2011, "Austin City Limits" moved to the new venue ACL Live at The Moody Theater in downtown Austin.