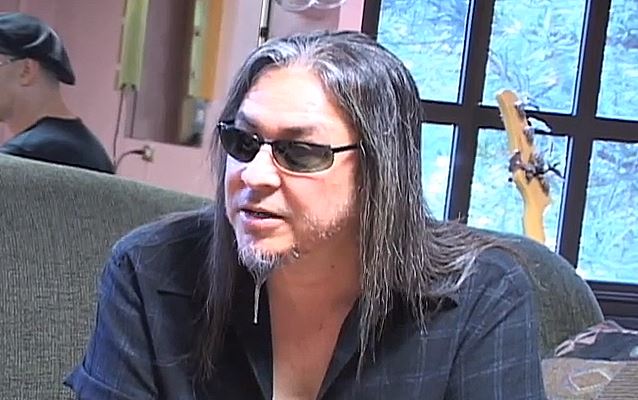 National Rock Review recently conducted an interview with QUEENSRŸCHE bassist Eddie Jackson. You can now listen to the chat using the audio player below.

QUEENSRŸCHE's new, self-titled album sold around 13,500 copies in the United States in its first week of release to land at position No. 23 on The Billboard 200 chart. The record arrived in stores on June 25 via Century Media Records.

"Frequency Unknown", the latest album from the Geoff Tate-fronted version of QUEENSRŸCHE, opened with around 5,500 units to debut at No. 82.

"Queensrÿche" marks the debut release from the lineup comprised of Todd La Torre (vocals; ex-CRIMSON GLORY),Michael Wilton (guitar),Parker Lundgren (guitar),Eddie Jackson (bass) and Scott Rockenfield (drums). The drums for the album were recorded at London Bridge Studios in Seattle, Washington with producer James "Jimbo" Barton — the man who engineered and mixed the band's classic 1988 LP, "Operation: Mindcrime", and its 1990 follow-up, "Empire", and co-produced 1994's "Promised Land". The rest of the music and vocals were laid down at several different facilities on the West Coast. The cover artwork was created by Craig Howell, who has previously worked on designs for "Star Wars", SLIPKNOT and "American Idol", to name a few.