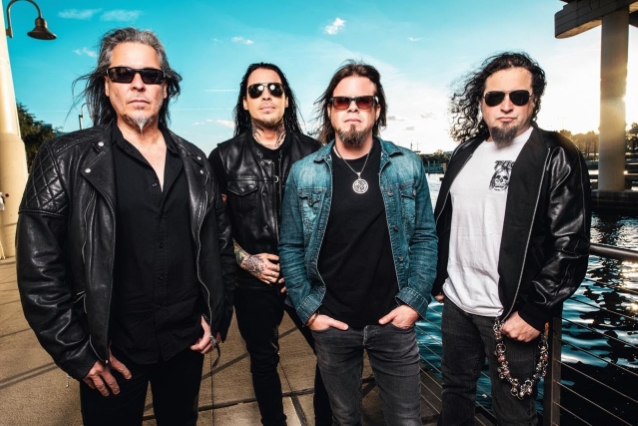 QUEENSRŸCHE has confirmed that the drum tracks on the band's upcoming album, "The Verdict", were laid down by singer Todd La Torre.

For the past two years, original QUEENSRŸCHE drummer Scott Rockenfield has been taking time off from the group's touring activities to spend time with his young son, who was born in early 2017. Filling in for him has been former KAMELOT drummer Casey Grillo.

Asked by a fan on Facebook if Rockenfield's lack of involvement with "The Verdict" means that Grillo will handle the drumming duties for QUEENSRŸCHE in the studio going forward, the band responded: "We're just taking it one day at a time and trying not to look too far ahead. Things are always changing and we can't predict what the future will bring. Right now we're just concentrating on getting this album in the hands of our Rÿchers and touring."

La Torre, who has played drums since the age of 13, was asked in a 2013 interview if fans could ever expect to see a little change-up where he is back behind the kit and Rockenfield upfront singing. He responded: "That could be. Scott and I talk about doing something and they've never done that before. They've never been able to do that before. So, I think visually it would be something great for me. It would be awesome, because I love drumming, and miss drumming, in a live situation. And I know the material. So, we've talked about, maybe doing a really cool dual drumming thing. So it wouldn't be impossible to see me out there on a drum set sometime."

"The Verdict" will be released on March 1 via Century Media Records. The disc was produced, mixed, and mastered by Chris "Zeuss" Harris (ROB ZOMBIE, ICED EARTH, HATEBREED) at Uberbeatz in Lynwood, Washington; Planet-Z in Wilbraham, Massachusetts; and Watershed Studio in Seattle, Washington.

QUEENSRŸCHE guitarist Michael "Whip" Wilton recently described "The Verdict" as "the most metal and the most progressive record we have made in a long time." Todd concurred, saying there are "more progressive elements" on "The Verdict" than there were on 2015's "Condition Hüman".

Posted by Queensrÿche on Tuesday, January 15, 2019