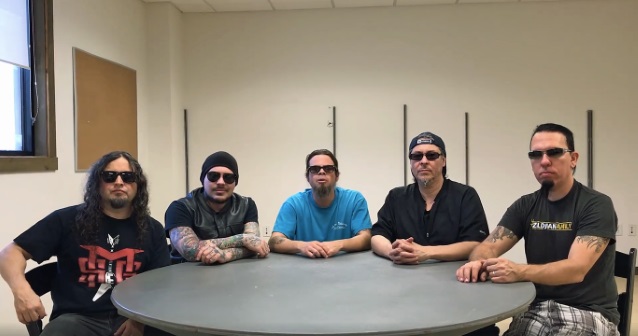 QUEENSRŸCHE Singer On Upcoming Album: 'We're In A New Headspace And I Think The Music Represents That'

At this year's edition of the M3 Rock Festival at the Merriweather Post Pavilion in Columbia, Maryland, QUEENSRŸCHE singer Todd La Torre spoke to Talking Metal about the progress of the recording sessions for the follow-up to the band's 2015 album, "Condition Hüman". "It's probably two-thirds of the way done — a little more than that," he said (see video below). "I'm actually flying back to Massachusetts to finish the last two songs on vocals. I know that Michael [Wilton] and Parker [Lundgren] finished all the guitar solos, so our engineer and producer, Chris 'Zeuss' Harris, he's been mixing and kind of taking care of those things while we've been on the road, so we've gotten some updated mixes, and it sounds really great. We're really looking forward to people hearing that. We're excited."

Regarding the musical direction of the new QUEENSRŸCHE material, Todd said: "I would say that this album still shows the diversity that one would expect from a QUEENSRŸCHE album. There's aggressive things on this record. I think that there's certainly more elements that are progressive in terms of thinking and playing, some fun time signatures, some vocal acrobatics, great rhythm and harmony guitars that you always expect from the band.

"Michael's written so many great songs, and it's been a little more challenging as the vocalist, because he has such a unique way of writing that it's not just 101 and very boxed in — it's very sometimes experimental," he continued. "But I think that this album is definitely the direction that we hoped for.

"You never know when you're in the demo phase and you're writing — you're, like, 'Well, do we hear an album here?'" Todd added. 'And fast forward to where we are now, it definitely has a unified sound, but offers the dark and slower elements also with the very driving, heavy elements as well."

Explaining that he would call QUEENSRŸCHE's musical progression an "evolution" rather than a "departure," Todd went on to say that "it's been a lot of fun" making the band's upcoming album. "It's been challenging because of being on the road and things like that," he said. "But I think it certainly equals or exceeds what I've been able to do with the band so far, and I think everyone would probably agree with that. We're in a new headspace and I think the music represents that."

La Torre also once refused to reveal the identity of the person who laid down the drums tracks on QUEENSRŸCHE's next album, saying that "you'll just have to wait and listen and see."

For the past year, QUEENSRŸCHE's founding drummer Scott Rockenfield has been taking time off from the band's touring activities to spend time with his young son, who was born in February 2017. Filling in for him is former KAMELOT drummer Casey Grillo.

Although QUEENSRŸCHE has not indicated if Rockenfield was involved with the making of the new disc, the band did confirm that Grillo did not play on the record, which will mark QUEENSRŸCHE's third full-length release with La Torre, following the departure of Geoff Tate in 2012.

"We didn't have outside writers and outside hired guns to play drums on the record," Todd told "Rock Talk With Mitch Lafon" in April. "The band QUEENSRŸCHE wrote and recorded the album, and it's certainly true to form."