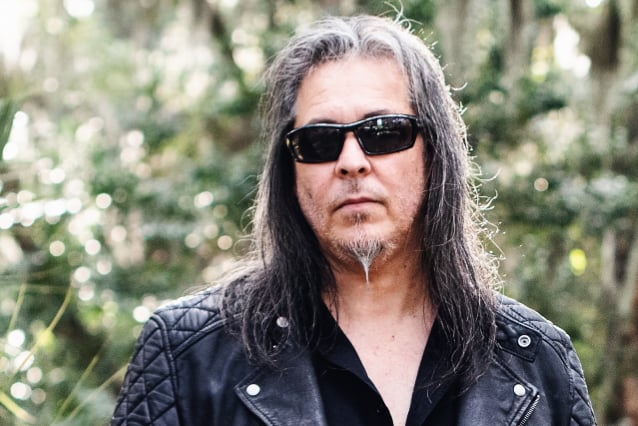 80's Metal Recycle Bin has uploaded an interview with Eddie Jackson in which the QUEENSRŸCHE bassist reflects on the departure of original vocalist Geoff Tate in 2012 and the addition of Geoff's replacement, former CRIMSON GLORY frontman Todd La Torre.

"We were sort of at a crossroads," Eddie said (as transcribed by BLABBERMOUTH.NET). "Things weren't really working out too well for the four original members, and a decision had to be made. That decision was made. So here we are.

"You would think that you'd have all your ducks lined up in a row, but we were right there at that crossroad wondering, 'Okay, well, some decisions need to be made. What's our backup plan?'

"Michael [Wilton, QUEENSRŸCHE guitarist] was working on a side project. And he had told us he was gonna take some time to write his own little solo CD. He was working with this singer, who's actually a drummer first and foremost, and a really good drummer, named Todd La Torre. He was able to hire him to work on his solo project. And at the time, when we made that decision to move on from our former singer, that's when Mike approached us and said, 'Listen, guys, I'm kind of working with this singer on my solo project. He's aware of the band. In fact, after working with him for several weeks, this guy can really hit a lot of those notes that Geoff was able to hit. So if we wanna get together and audition him, just let me know.' And at the time also, Geoff was working on his solo project — he was way well in advance with his solo project; I think it was already released and he was gonna put together a tour. So we were in limbo for a while. And then that's when Mike approached us and suggested [Todd] as a singer for us to sort of perform some cover-band songs as well as QUEENSRŸCHE songs.

"We got together," he continued. "And it was one of those… Without realizing and knowing too much about someone… He was well aware of he band. When Michael brought him over to rehearsals, we just sat down and started talking, 'Hey, what do you listen to?' We just started chatting and talking, obviously, about QUEENSRŸCHE and himself as a musician and all. So we just got together this one rehearsal afternoon and got everything set up. And he asked, 'Hey, what do you wanna start with?' [And we said], 'You tell us, because if you wanna rehearse on any QUEENSRŸCHE songs, just let us know which one, because I'm sure Michael gave you a list of songs that we could kind of run through.' And he goes, 'How about 'Queen Of The Reich'?' 'Okay. Fine. Perfect.' So we started the intro, and here he is singing that intro where the voice sort of ramps right up with that long, screaming, piercing tone, and I'm playing my bass and I'm hearing this and I'm looking over and I'm looking at Scott [Rockenfield, then-QUEENSRŸCHE drummer], and I go, 'Wow!' And I'm just playing and stuff. So we got through the song, and I go, 'Sure. I'm sold. Let's work together.' And it was pretty much the consensus for everyone. It took just pretty much one song."

Two weeks before announcing that QUEENSRŸCHE was parting ways with Tate in June 2012, Jackson, Wilton, Rockenfield, La Torre and and guitarist Parker Lundgren played two shows in their hometown of Seattle under the name RISING WEST. Fan-filmed video footage of one of the gigs can be seen below.

Wilton and Jackson are the sole remaining original members of QUEENSRŸCHE, which has released three albums thus far with La Torre on vocals — 2013's "Queensrÿche", 2015's "Condition Hüman" and 2019's "The Verdict".