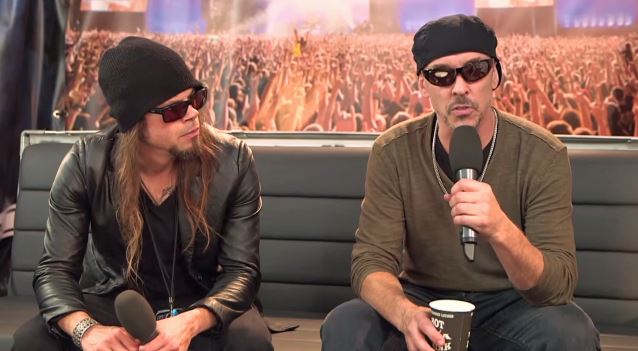 Arte conducted an interview with QUEENSRŸCHE drummer Scott Rockenfield and singer Todd La Torre at this year's edition of the Wacken Open Air festival, which is taking place this weekend in Wacken, Germany. You can now watch the chat below. A couple of excerpts follow (transcribed by BLABBERMOUTH.NET).

Scott: "In the last three years, we went through some great changes in the band. We had to make a transition and do some things for the band to get QUEENSRŸCHE up on top and making the music that is important to QUEENSRŸCHE and to the QUEENSRŸCHE. And that transition involved us hooking up with our good buddy Todd. Todd's been in the band now for over three years with us. And we have a chemistry together. We needed to find somebody that could work with us and support the QUEENSRŸCHE legacy and then make new music with us."

Todd: "I've become very close with everyone in the band. And I was a huge fan of QUEENSRŸCHE since I was [in my] early teens. So I understand both sides — one, being in the band now; and two, from a fan's perspective. There's just been kind of a new energy that the band seems to have. That's what a lot of the fans seem to say, and our peers, and even the three original guys in the band. So, you know, we're just having a great time, and I'm just doing the best that I can for the guys in the band and the fans first."

On QUEENSRŸCHE's new album, "Condition Hüman", which will be released on October 2 via Century Media:

Todd: "There's a diversity on the album that I think really appeals to the old, the true QUEENSRŸCHE fans from the [first] EP days, even to new, current fans that the band is getting, but it still maintains the continuity of the QUEENSRŸCHE sound, but with a fresh approach today, which is a tricky thing — to have a band like QUEENSRŸCHE, with that many years behind them, to create music that still sounds rooted, with the dynamics and the writing style that the band has, while also sounding current. And I think that this album really does reflect that. And so we're just really excited for the fans to hear the new release coming up."

"Condition Hüman" was recorded in part at at Uberbeatz Studio in Washington with producer Chris "Zeuss" Harris, who has previously worked with ROB ZOMBIE, HATEBREED, SOULFLY and SHADOWS FALL.