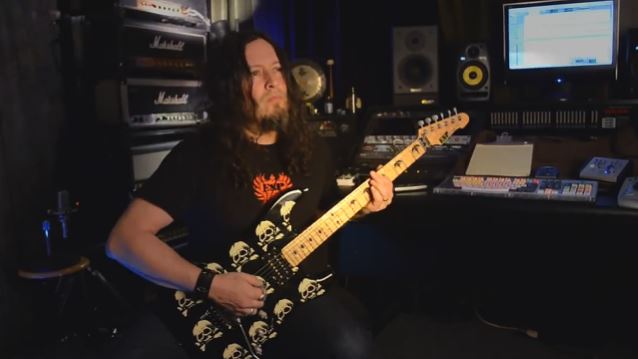 Episode 249 of the "Iron City Rocks" podcast (web site) features an interview with QUEENSRŸCHE and SOULBENDER guitarist Michael Wilton. You can now listen to the chat using the audio player below. A couple of excerpts follow (transcribed by BLABBERMOUTH.NET).

On whether he thought 30 years ago that QUEENSRŸCHE would still be around after all this time:

Wilton: "We're just thankful and we love what we do, and what we do is we love to write music and to perform music. And as long as there's an audience for us, we'll continue to write and perform. And so far, there's definitely a demand for QUEENSRŸCHE, so we've got better days ahead of us, and the future looks really good."

On the progress of the songwriting sessions for QUEENSRŸCHE's new studio album:

Wilton: "QUEENSRYCHE is in the writing process right now. We are putting together lots of songs and there's no real underlying stress that's with us right now. So we're really just having fun and putting together some kick-ass songs. And we're hoping to get into the studio maybe in October or November, and then have this thing out sometime next year — probably the first quarter, or April/May. We'll see. So it will be a 2015 release, along with a world tour that we'll do to promote the record. And we'll start the whole cycle again."

QUEENSRŸCHE's self-titled album sold around 13,500 copies in the United States in its first week of release to land at position No. 23 on The Billboard 200 chart. The record arrived in stores on June 25, 2013 via Century Media Records.