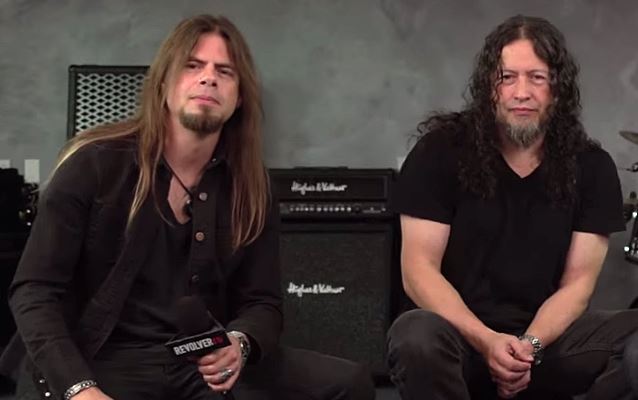 Chris Enriquez of Revolver magazine recently conducted an interview with QUEENSRŸCHE members Todd La Torre (vocals) and Michael Wilton (guitar). You can now watch the chat below. A couple of excerpts follow (transcribed by BLABBERMOUTH.NET).

On how QUEENSRŸCHE hooked up with producer Chris "Zeuss" Harris for the new album, "Condition Hüman":

Wilton: "Actually, he was a recommendation from somebody at [QUEENSRŸCHE's record label] Century Media. We were looking for somebody for this body of music that could encapsulate the magic of the early albums, as far as the musicianship and getting the recording and bringing that back into 2015. So Zeuss was the perfect guy, because he's a fan of those early QUEENSRŸCHE albums, and he knew exactly what to do. That was kind of the beginning idea — the whole seed that was sown — to just get somebody that was really into the music that knew the arrangements and how he could take it to the next level."

On Todd being the "new guy" in QUEENSRŸCHE:

Todd: "You know, in the band, I don't feel like the new guy, because I'm an integral part of the writing process and decisions in the band. And so they've really brought me into the fold completely. So, in that respect, I don't feel like the new guy. I'm sure, to some degree, I will always… there'll be some talk about the 'new guy,' just because my time in the band… I can never compete with a 30-year legacy with that. But I think that, for me, the important thing is the quality that I've been able to be a part of in the three to four years that I've been in the band; I think that that's what probably most important. But I think a lot of people are starting to see QUEENSRŸCHE as this lineup, and they're in the now and thinking forward; they're not looking backwards."

"Condition Hüman" will be released on October 2 via Century Media. The CD was recorded in part at at Uberbeatz Studio in Washington with Chris "Zeuss" Harris, who has previously worked with ROB ZOMBIE, HATEBREED, SOULFLY and SHADOWS FALL.