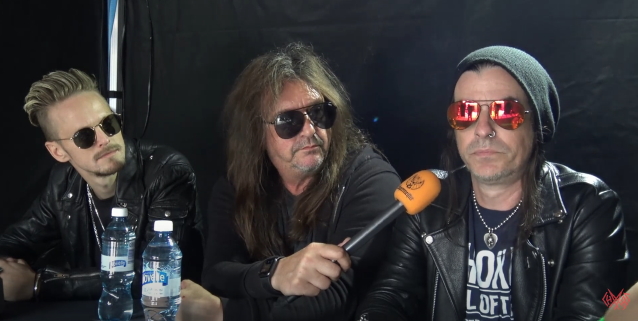 RACHEL BOLAN On SKID ROW's New Lineup: 'It Kind Of Feels Like A New Band'

SKID ROW frontman Erik Grönwall, bassist Rachel Bolan and guitarist Dave "Snake" Sabo were interviewed by Chaoszine prior to their performance at Sauna Open Air festival in Tampere, Finland on July 9. You can now watch the chat below.

Regarding the feedback SKID ROW has received to the first single from the band's upcoming album, "The Gang's All Here", and their recent live performances, Bolan said: "It kind of feels like a new band, like we hit a reset button. And the attention that we're getting now, it's very positive, and it's nice to have that back."

Rachel also touched upon the addition of Erik, who went from auditioning for the competition show "Swedish Idol" back in 2009 by singing a cover of SKID ROW's "18 And Life" to now fronting the band. He joked: "We needed to wait for [Erik] to be born and grow up. That was our plan all along. We were waiting for some kid in Sweden to be born and then be old enough to come on the road with us.

"But, yeah, it's been great," Bolan continued. "And it has really brought this band to a new level. There's nothing bad I could say about it — 'cause I would. [Laughs]"

"The Gang's All Here" will be released on October 14 via earMUSIC. SKID ROW recorded most of the effort in Nashville, Tennessee with producer Nick Raskulinecz, who has previously worked with FOO FIGHTERS, STONE SOUR, HALESTORM, EVANESCENCE, RUSH and ALICE IN CHAINS, among many others.