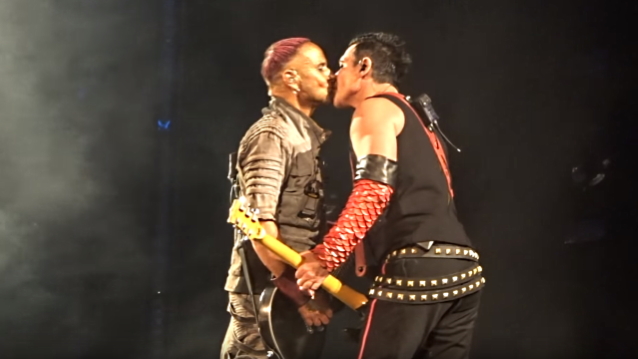 Guitarists Paul Landers and Richard Kruspe moved toward one another before kissing during a performance of the song "Aüslander" at Luzhniki Stadium on Monday (July 30).

The German industrial metallers posted a photo of the moment on their Instagram page with the caption: "Russia, we love you!"

Earlier in the month, RAMMSTEIN surprised fans during a concert in Chorzów, Poland by waving rainbow and Polish flags while travelling from one stage to another in little inflatable boats.

Tomasz Kołodziejczyk, head of the local LGBT foundation Stowarzyszenie Tęczówka, said the band reached out to them prior to the concert and asked to borrow the flags.

The move was widely seen as the band's response to recent events in Poland where attacks on the LGBT people by extremist far-right nationalists are on the rise.

In 2013, Russia passed a controversial law that can see people arrested for behavior that is deemed to promote homosexuality.

The law provides for Russian citizens engaged in the "propaganda of non-traditional sexual orientation" to be fined, while foreigners can be arrested and immediately deported.

The Moscow Times reported in May that nearly half of Russians support equal rights for members of the LGBT community, marking the highest level of support in 14 years.

Forty-seven percent of Russian respondents agreed that gays and lesbians should enjoy the same rights as other citizens, while 43 percent disagreed.

Back in 2005, RAMMSTEIN vocalist Till Lindemann denied that the lyrics to the band's controversial single "Mann Gegen Mann" ("Man Against Man") were homophobic. (In the song's chorus, the word "schwule" — German for "f****t" — is uttered repeatedly.) "It's natural [to perceive it that way], but it's just a song," the singer told the Swedish magazine Close-Up. "It's about gay men and the fact that they're lucky in a way. They never had to strut in front of girls and bring them ridiculous gifts or make dinner invitations. They just look at each other and decide to go home together. They're in a strange situation, but it's very easy for them to get laid. I write about this in a more poetic fashion. If you just hear the word [schwule] taken out of context, it's provocative, but if you really listen to the lyrics, you realize that it's not at all meant to be derogatory.

"I'm not going to give out any name, but an English band that we [RAMMSTEIN] are friends with has two gay members," he added. "We made a bet about something and if I were to lose I had to take the two of them out in Berlin one night and visit all the gay clubs in my neighborhood. Of course, I lost the bet, just like I always do. When we went out, I just thought: 'Wow! This is happening fast!' One glance and then both of them knew exactly what to do. I was jealous. I would love to walk up to a strange woman and go: 'Hi, you're hot. Wanna come back to my place?"

RAMMSTEIN is currently touring Europe in support of its seventh, untitled album.