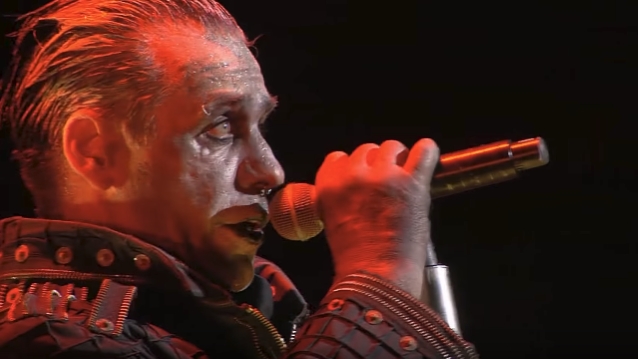 German industrial metallers RAMMSTEIN are putting the finishing touches on their long-awaited new album for an early 2019 release. The follow-up to 2009's "Liebe Ist Für Alle Da" will be mixed at a Los Angeles studio beginning in mid-December with Rich Costey, an American producer who has previously worked with MUSE, RAGE AGAINST THE MACHINE and FRANZ FERDINAND, among others.

RAMMSTEIN guitarist Richard Z. Kruspe spoke about the band's upcoming disc while promoting "A Million Degrees", the upcoming third effort from his EMIGRATE side project. Saying that he was "very proud" of the new RAMMSTEIN album, Kruspe told France's United Rock Nations that the record was "almost finished," with only "last touch-ups, like small things here and there," remaining to be done.

Asked about the musical direction of the new RAMMSTEIN music, Kruspe said: "To me, the process of doing this record was something that I'm very happy with, because we've managed to gain a certain kind of respect back that we have lost in the past. It also kind of reminded me, the way that we are the moment, as the beginning from RAMMSTEIN. So, music-wise, I think it's richer when it comes to harmonies and melodies. That was also something that I was trying to do, because in the past, every time you talked about RAMMSTEIN, it's all about this big burden about the show and the fire. Nobody really talks about the music, which is, to me, as a [music] writer, kind of a slap in your face. It was also important to me that we kind of step up, music-wise, in a way. It's almost like RAMMSTEIN 3D, I would describe it."

Kruspe said that there are no plans for EMIGRATE to tour in support of "A Million Degrees", explaining that "I really don't have the time for that. I'm going to Los Angeles in the middle of December to mix the RAMMSTEIN record," he said. "After that, we [RAMMSTEIN] are in the middle of tour preparation, and then we're gonna be on tour for the next three years. So first of all, there's no time, but even if there were time at the moment, I like the balance that I have with the EMIGRATE project and RAMMSTEIN."

RAMMSTEIN recently announced a batch of summer 2019 European tour dates. The run of stadium and arena shows will kick off on May 27 in Gelsenkirchen, Germany and end on August 23 in Vienna, Austria.

In 2016 and 2017, RAMMSTEIN played a number of concerts where the band opened each show with a brand new song, presently only known as "Ramm 4". The track contained lyrics that seemed to be a combination of various titles of previous RAMMSTEIN songs.