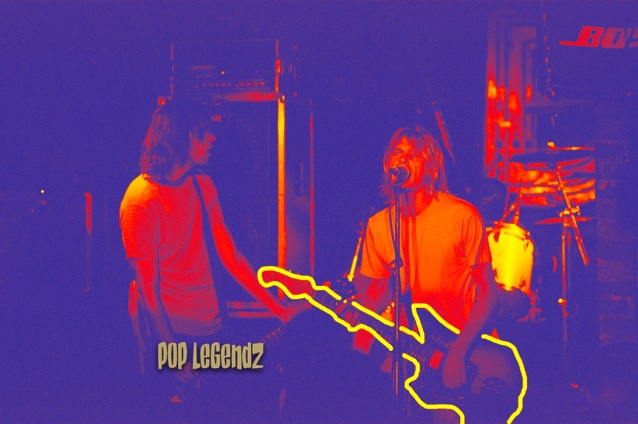 It was just six days after NIRVANA released its groundbreaking "Nevermind" album when the bandmembers took the stage on October 1, 1991 at the intimate J.C. Dobbs venue in Philadelphia, Pennsylvania. Photographer Faith West was in the crowd that night and captured the raw, electric energy. A few weeks after the show, the band exploded to international stardom.

Now, over three decades later, 28 never-before-seen live NIRVANA images are set to be sold as NFTs via Pop Legendz on February 20, marking what would have been Kurt Cobain's 55th birthday. These one-of-a-kind NFTs are available on the Pop Legendz web site, a gateway site to the trusted Rarible platform where these NFTs are minted. Pop Legendz is selling these unforgettable moments directly to fans and collectors alike, with the ability to purchase items at auction with a cryptocurrency wallet, or with either cryptocurrency or a credit card for items in the sale

Steve Baltin of Forbes exclusively unveiled details of the project yesterday, commenting: "See the band as they were then — young, hungry, unaware of the stardom that was awaiting them."

For high-end music collectors, four unique one-of-a-kind NFTs made from 10 never-before-seen images have been selected to be sold, auction-style, with bids beginning at 67 Ethereum (currently valued at a quarter million U.S. dollars) for the GIF artworks. These buyers will also receive a framed 16" x 24" fine-art print of one image, signed by the photographer. Additionally, these 10 images that make up the artworks will be auctioned off individually as NFTs, both in black-and-white and in acid-washed color versions.

For fans of NIRVANA — the band that altered the course of rock history forever — there's the "Nirvana Fan Club," a sale of limited-edition NFTs for fans: 150 lucky NIRVANA fans have the ability to purchase 10 GIF artworks as NFTs, crafted from four images, at $499 (U.S.) each, plus 150 copies of each of 17 still images will be sold for $99 (U.S.) each, in both black and white and acid-washed color.

Half of all proceeds from both sales benefit The Trevor Project, a non-profit assisting at-risk LGBTQ+ youth to prevent suicides. Part of the remainder of the proceeds will benefit Grid Alternatives, bringing solar power to working poor families, tackling both climate change and income inequality.

"At the club that night, the air was thick with anticipation," recalls West. "There was a buzz of excitement that said something awesome was about to transpire. Also, there was a sense of joy emanating from Cobain in his raucous guitar licks and the transcendent longing of his vocals…I can still hear the echo of the fuzzy guitar, and feel the energy in the room, when I recall it now, three decades later."

Pop Legendz is among the first NFT gateways to exclusively feature pop culture icons, aiming to bring the reliable ownership ledger and fun of collecting NFTs to the traditional pop culture memorabilia market.

West, founder of Pop Legendz, is a professional photographer and a freelance music journalist. With her Philadelphia-based company TCI Photo-Video, she's created images for many well-known clients including Merck and Qatar Airways, plus photographed a wedding for actor Bill Murray when his son Luke got married. Her music reviews have been published in the Philadelphia Inquirer, The Washington Post, and musicwire.com. Faith brings her broad knowledge of the intersection of pop culture and image-making to the NFT world with her groundbreaking collection of one-of-a-kind moments in musical and pop culture history from legendary icons.