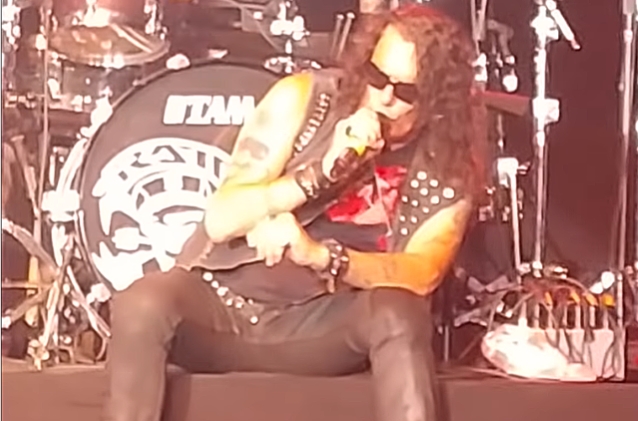 A number of RATT fans have taken to social media to express their concern for singer Stephen Pearcy, who stuggled through the band's concert last night (Wednesday, September 26) in Huntington, New York.

Fan-filmed video footage of the performance at The Paramount shows Pearcy slurring his way through some of RATT's biggest hits while sitting down and nearly lying down on the drum riser. According to Metal Sludge, the 62-year-old singer also appears to be slouching or leaning on to the bass drum during "Round And Round" and holding on to the tom-tom stand and bass drum to keep from falling over.

At one point during the set, RATT bassist Juan Croucier told the audience that Pearcy was in "a lot of pain" due to an apparent "injured" knee, and said that he and his bandmates refused to cancel the show because they "love each and every one" of their fans.

Croucier said (see video below): "Let me just say something, all right? In case you guys didn't notice, Mr. Stephen Pearcy is in a lot of pain. But tonight, we said there's no way, there's no way we're canceling this show. Because we love you guys. We love each and every one of you, and thank you so much for coming down. We promise we'll be back, without the injury, okay? Thank you so much for your understanding. We're gonna keep going and do our best."

Back in 2008, RATT made headlines in Mexico when the band was forced to cut short its concert in Monterrey after Pearcy appeared to be incapacitated and was unable to complete the show. RATT's then-rhythm guitarist John Corabi, who is best known for having replaced Vince Neil as the frontman for MÖTLEY CRÜE in the early 1990s, apologized to the crowd and blamed the mishap on "jet lag" before taking over on lead vocals for a few tracks.

In a 2014 interview, RATT drummer Bobby Blotzer, who is not involved with the group's latest lineup, said that Pearcy's battles with the bottle were the source of many arguments among the bandmembers. "I'm the only one that will confront him on this," Bobby said. "And confront him on, 'Dude, you can't go on stage in this condition. Don't be motioning to my drum tech to get you a glass of Jack when we're playing.' 'Cause we all have agreed to not drink and get intoxicated on stage."

He continued: "I don't care if somebody has a couple of beers. But you know what?! When you're slamming Jack and whatever else you're taking — I'm not in his area all the time — but let's face it, man: we need him in his top form, he needs to be playing at his top game."

@metalsludge Stephen Percy’s “knee” injury really carried over to his performance tonight! Hopefully his “knee” gets some attention ASAP! Thank god I was only at the show for Juan’s sweet moves or I would have been disappointed pic.twitter.com/aqyRxj0E89

@MetalSludge Way Fucked Up Jr. ! If anyone in this organization had a soul they’d just stop and get the ship in order! pic.twitter.com/FNSJXTF4Ha