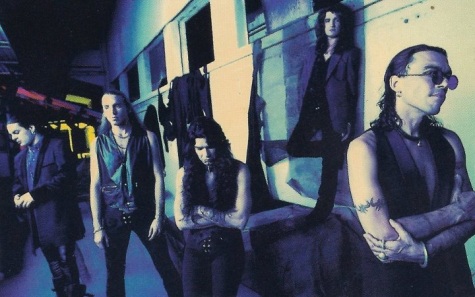 ARCADE, the short-lived early-'90s outfit that included vocalist Stephen Pearcy of RATT and drummer Fred Coury of CINDERELLA, will be resurrected for a couple of performances on the Monsters Of Rock Cruise, which will embark on its second voyage from March 16 to March 20, 2013.

ARCADE signed a major label deal with Epic and released its self-titled debut in 1993. A follow-up effort, "A/2", came out in 1994 and went virtually unnoticed.

2000 saw the release of the final ARCADE CD of demos and live recordings, "A/3: Live & Unreleased".

Departing from Fort Lauderdale, Florida, this cruise will visit the private island of CocoCay, plus Nassau, Bahamas with a rockin' bonus day at sea, sailing the emerald waters in this unprecedented floating heavy metal festival.

For one all-inclusive price, fans will enjoy a myriad of special heavy metal concerts, events and activities, designed to please the most discerning rock 'n' roll metalhead. While the music is the centerpiece, this is more than a concert cruise event. It is fantasy camp designed for interaction between artists and fans. The fun will begin the moment fans begin to board the beautiful MSC Poesia, meeting new friends poolside during the kickoff Sailaway Concert.