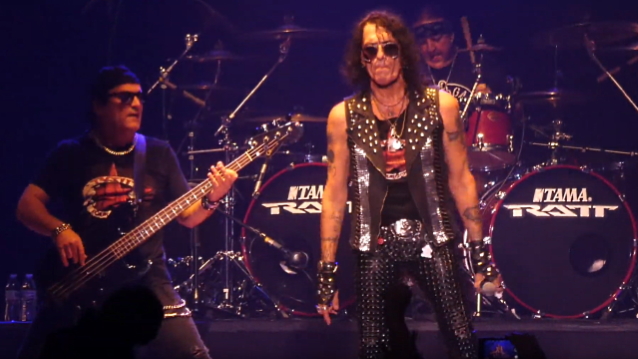 RATT will be "ready to go" with a new rhythm guitarist and new music in 2021.

This past July, the veteran California rockers announced that all their previously announced shows in 2020 were being rescheduled for next year.

RATT was slated to hit the road in North America this summer part of "The Big Rock Summer Tour" with CINDERELLA's Tom Keifer, SKID ROW and SLAUGHTER.

On Monday (October 12),RATT's Facebook page was updated with a photo of singer Stephen Pearcy and guitarist Jordan Ziff, along with the following message: "RATT's in the cellar! Founder, lead, singer Stephen Pearcy (pictured) with lead guitarist Jordan Ziff on new music at Pearcy's, while Juan Croucier (bassist vocalist for RATT) has renovated updated his Cellar Studios for the band to go in, rehearse and work on new music. Pearcy and Croucier agree, 'It's time to kick some ass. We'll be ready to go with a rhythm guitarist and new RATT music 2021'. As for getting back to doing concerts? 'We're so eager to get out there and play again'. You've got to Ratt n' Roll with the punches, its nothing new for the relentlessly unyielding quintet."