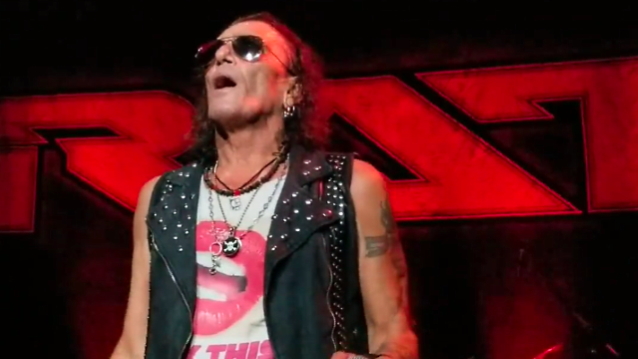 RATT singer Stephen Pearcy is working on a new song co-written by the band's guitarist Jordan Ziff. The track is expected to appear on RATT's forthcoming follow-up to 2010's "Infestation" album.

Last month, RATT bassist Juan Croucier said that the group had not yet found a replacement for guitarist Chris Sanders, who left the band earlier this year.

This past February, RATT played a one-off show in Oklahoma as a four-piece following Sanders's departure. But according to Croucier, the tentative plan is for RATT to hire a new second guitarist prior to the launch of the group's next round of dates.

Three months ago, Chris released a statement to Mike Gaube's Headbangers announcing his retirement from the music industry. He wrote: "At the beginning of the year, I sent an email to [RATT's] management that I would not be renewing my contract for 2020. After playing music in some form for 25 years, I've retired from the industry."

RATT is scheduled to join forces with Tom Keifer, SKID ROW and SLAUGHTER for a U.S. tour, dubbed "The Big Rock Summer Tour", this summer.