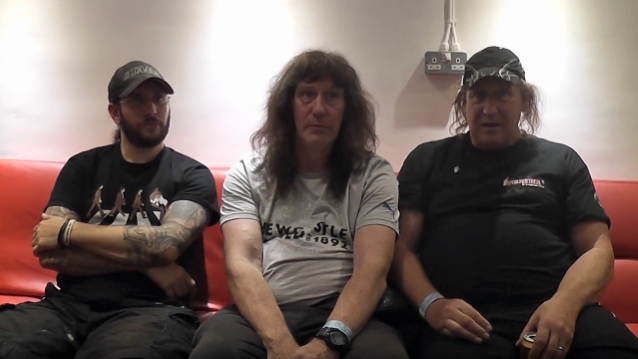 RAVEN: New Studio Album 'In The Can', Live Album On The Way

Speaking to Mark Taylor of Record Collector magazine before RAVEN's September 5 concert in London, bassist/vocalist John Gallagher said: "We have a new album in the can, which features this lunatic" — referring to Heller — "very heavily. We're very excited about it. It's definitely a jump forward. There's some very fast music on it, but it's very quirky and melodic at the same time, so there's a real dichotomy in that, which is always in the best RAVEN music anyway."

Added guitarist Mark Gallagher: "Actually, the record needs a little fine-tuning, some mixing, but it's pretty much done."

There are plans for RAVEN to release a live album as well, also featuring Heller behind the kit. "We were shocked when we heard the tapes," John said. "[We thought] 'Woah! This is pretty damn good.'"

Added Mark: "Live albums these days aren't really live, because there's an ability now with the technology to go in and redo stuff and fix stuff. And this record, the live album, is completely live, other than that John breaks his bass string, so we had to replace the bass on one song. But the rest of the record is completely [live] — warts and all."

"ExtermiNation" was released in April 2015 via SPV/Steamhammer.