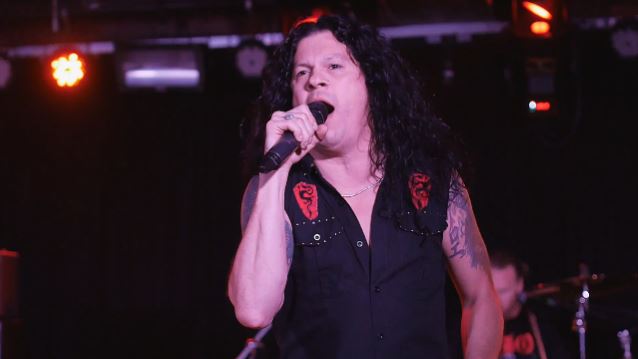 Singer Darren James Smith of RED DRAGON CARTEL, the band led by former OZZY OSBOURNE and BADLANDS guitarist Jake E. Lee, was interviewed on a recent edition of "The Shoe With Miles Schuman", the Internet radio show hosted by 15-year-old Miles "The Shoe" Schuman. You can now listen to the chat using the Spreaker widget below. A couple of excerpts follow (transcribed by BLABBERMOUTH.NET).

Darren: "None of us were ready for that show. We all met in Vegas, we had, maybe, four days rehearsal, we rehearsed the night before until about 4 a.m., got up at 7, drove to the desert, got to L.A. around 4 in the afternoon, or sometime early in the afternoon, and there was fans there and paparazzi from the minute we got there. So it was overwhelming. And the amount of time I had — us being the headliner — until we were on, and just the lack of sleep, and really not knowing what my job really was. Nobody in the band, not even Jake, nobody told me what my job was. It was just, 'Go and do it.' So… I don't know what people want. I just thought they wanted kind of Ozzy and stuff like that, and they wanted a party, they wanted to have fun, but that's not what they want. And at the end of the day, man, on my own terms… I mean, I just said, 'Okay, if they don't want that, I'll do it the other way.' I didn't realize that people would think I'm trying to upstage Jake. I was not; I was just doing what I do. But I got a handle on it. And there was no feeling between me and the band. The next day, I just came back to the drawing board, and then that was that. The very next night, I changed the rules a bit and everything was fine. But, I mean, we just played there [again in November], we'll call it the 'scene of the crime,' and we had a great show, like a phenomenal show. [And there was] not word about it. So we were talking about it afterwards, and it's, like, it was probably the best thing that ever happened to us, was that I set myself up to fail. Because it was nonstop talk. And we do a perfect show, [and there's] not a word about it."

On the negative Internet criticism he received about the first Whisky show:

Darren: "Everybody's a warrior or a soldier when they're sitting on their couch, scratching their balls. I mean, people are so tough and brave when they're in the comfort of their own home, but half these people making comments have never stood on a stage. And the ones that have stood on a stage… A real musician wouldn't shit on a fellow musician. So the way I look at it is, if you've got something to say about a fellow musician, well, you're just a douchebag. [Laughs]"

"I'll be honest with you, I don't read or any of that shit. I never go online and read about it… I mean, in the beginning I did and it was very hurtful stuff, and it did affect me, but at the end of the day, I know what I'm capable of, Jake knows what I'm capable of, and things have changed. And I get no complaints now. But at the end of the day, I'm still doing this for me. [There are] people out there that still don't like me, but you can't be liked by everybody. You can't go through life trying to please everyone. It's futile."

On whether he thinks he "redeemed himself" in the eyes of Jake's fans since the first Whisky show:

Darren: "Less than 24 hours later I did. And I really don't care. And as far as redeeming myself, I'm more comfortable on stage now than I've ever been, and I just had to figure it out for myself. And, like I said, as a band, we were not prepared to play the Whisky. I wish we had done some warm-up shows here and there and figured it all out. I hadn't been on stage fronting a band for that long, for the length of a show, which is also exhausting, I found out [laughs], thus the treadmill before I go on tour. But I had to figure things out for myself. And I'm human, and I'm fallible, and I'm capable of making mistakes, just like every human being is. And the people that were really cruel about it, I could give a flying rat's fuck about it — I just don't care — but the people that like it? You know, cool. Cool. That's great. I'm gonna do it regardless if people like it or not. This is what I'm born to do. This is what I do."

On whether he thinks he will sing on the entire next RED DRAGON CARTEL album, in contrast to the first CD, which featured several guest lead vocalists, including legendary CHEAP TRICK vocalist Robin Zander:

Darren: "More than likely. I came in late on that project, and I kind of think I was an afterthought.I guess they were doing this record, and [they thought], 'Hey, we're gonna need somebody who can sing this.' And I don't even know if I hadn't come in then, if I would have sang on the record. It might have been all different singers. I never really spoke to anyone about it. But they were asking me to re-cut vocals on songs that were already sung by some of the people on there, and I'm, like, 'No.' [Laughs] 'I wanna be on a record with Robin Zander.' I'm not saying they were gonna cut him or anything. But I thought it was a great way for Jake to come back. And I think the song structuring and writing, I thought it was brilliant. It sounds like Jake, but it was fresh and new. I wouldn't wanna guess what the next record's gonna be like, but I have a feeling it's gonna be a little but more soulful, I think — just the way the band's playing and how we're getting off on some of the old BADLANDS stuff. But that remains to be seen yet."